The Seven Ravens facts for kids

"The Seven Ravens" (German: Die sieben Raben) is a German fairy tale collected by the Brothers Grimm (KHM 25). It is of Aarne–Thompson type 451 ("The Brothers Who Were Turned into Birds"), commonly found throughout Europe.

Georgios A Megas collected another, Greek variant in Folktales of Greece. Other variants of the Aarne–Thompson type include The Six Swans, The Twelve Wild Ducks, Udea and her Seven Brothers, The Wild Swans, The Twelve Brothers, and The Magic Swan Geese.

An animated feature film based on the story was released in 1937 (see The Seven Ravens).

The tale was published by the Brothers Grimm in the first edition of the Kinder- und Hausmärchen in 1812, under the name "Die drei Raben" (The Three Ravens). In the second edition, in 1819, the name was retitled Die sieben Raben and substantially rewritten. Their source was the Hassenpflug family, and others. 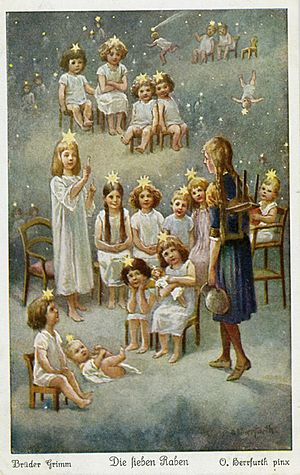 She reaches the stars

A peasant has seven sons and no daughter. Finally a daughter is born, but is sickly. The father sends his sons to fetch water for her, in the German version to be baptized, in the Greek version to take water from a healing spring. In their haste, they drop the jug in the well. When they do not return, their father thinks that they have gone off to play and curses them and so they turn into ravens.

When the sister is grown, she sets out in search of her brothers. She attempts to get help first from the sun, which is too hot, then the moon, which craves human flesh, and then the morning star. The star helps her by giving her a chicken bone (in the German) or a bat's foot (in the Greek) and tells her she will need it to save her brothers. She finds them on the Glass Mountain. In the Greek version, she opens it with the bat's foot, in the German, she has lost the bone, and chops off a finger to use as a key, (or she opens it with chicken bone). She goes into the mountain, where a dwarf tells her that her brothers will return. She takes some of their food and drink and leaves in the last cup a ring from home.

When her brothers return, she hides. They turn back into human form and ask who has been at their food. The youngest brother finds the ring, and hopes it is their sister, in which case they are saved. She emerges, and they return home. 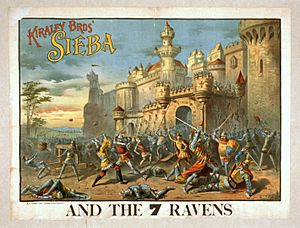 The Liechtenstein composer Josef Rheinberger based an opera on the tale, which was premiered in 1867. Ludwig Englander wrote a romantic fairy tale in four acts called The Seven Ravens, combining drama, pantomime, opera and ballet. The libretto was by C. Lehnhardt and based on the original German play by Emil Pohl. It was translated by G.P. Lathorp and ran at Niblo's Gardens, New York, from 8 November 1884 for a total of 96 performances. A competing spectacle by the Kiralfy Brothers, Sieba and the Seven Ravens, was presented at the Star Theatre.

All content from Kiddle encyclopedia articles (including the article images and facts) can be freely used under Attribution-ShareAlike license, unless stated otherwise. Cite this article:
The Seven Ravens Facts for Kids. Kiddle Encyclopedia.