The Tolhouse facts for kids

The Tolhouse (also the Tolhouse Gaol) is a 12th-century building in Great Yarmouth, Norfolk, England. The building has been used as a jail and a courthouse and is currently a museum. The Tolhouse is a Grade I listed building. 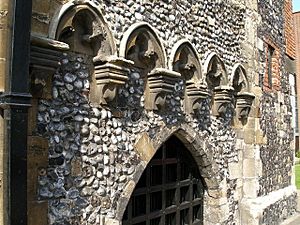 The Tolhouse is built of flint and ashlar.

The Tolhouse was built around 1150, and is believed to have been built by merchants. It is the oldest civic building in Great Yarmouth and one of the oldest remaining buildings in the town. The house is built of flint and ashlar with a tiled roof. The hall of The Tolhouse measures around 45 by 27 feet (14 by 8 m).

From the 13th century, it was used as a toll house for herring catches from the quay and is believed to have first been called The Tolhouse in 1360. In 1261, King Henry III gave permission for the Tolhouse to be used as a jail (gaol). The prison was in the basement of the building, and its main occupants of the jail were smugglers and pirates. In the 1400s, some inmates at the Tolhouse jail waited 10 years for a trial. In 1645, witch-hunter Matthew Hopkins used the Tolhouse jail during his witch trials, in which several local women were hanged. In the 18th century, the Tolhouse used hard labour, on a treadmill or picking oakum nearby. In the early 19th century, British prison visitor Sarah Martin criticised the living conditions in the jail, as the cells were too warm and the jail was unsanitary. She also objected to the fact that the inmates had no access to a church or chaplain. Until 1823, prisoners had to pay jail fees. In 1864, HM Inspectorate of Prisons criticised living conditions in the jail, as five people were sharing one room. They recommended that female prisoners be sent to Wymondham Bridewell, to allow for more space and better living conditions for the remaining prisoners. The underground cells stopped being used in 1836, and, later in the 19th century, the building's dungeons were used as storerooms.

All content from Kiddle encyclopedia articles (including the article images and facts) can be freely used under Attribution-ShareAlike license, unless stated otherwise. Cite this article:
The Tolhouse Facts for Kids. Kiddle Encyclopedia.