The Walrus and the Carpenter facts for kids 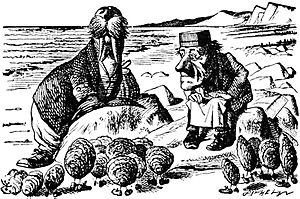 The Walrus and the Carpenter speaking to the Oysters, as portrayed by illustrator John Tenniel

"The Walrus and the Carpenter" is a narrative poem by Lewis Carroll that appeared in his book Through the Looking-Glass, published in December 1871. The poem is recited in chapter four, by Tweedledum and Tweedledee to Alice. The poem is composed of 18 stanzas and contains 108 lines, in an alternation of iambic tetrameters and iambic trimeters. The rhyme scheme is ABCBDB, with masculine rhymes throughout. The rhyming and rhythmical scheme used, as well as some archaisms and syntactical turns, are those of the traditional English ballad. 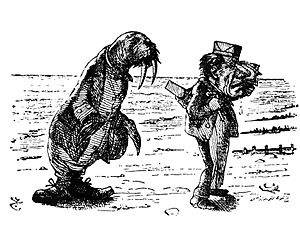 "If seven maids with seven mops
Swept it for half a year,
Do you suppose," the Walrus said,
"That they could get it clear?"
"I doubt it," said the Carpenter,
And shed a bitter tear.

The Walrus and the Carpenter are the eponymous characters in the poem, which is recited by Tweedledum and Tweedledee to Alice. Walking upon a beach one night when both sun and moon are visible, the Walrus and Carpenter come upon an offshore bed of oysters. Groups of four are called up; the exact number is unknown. To the disapproval of the eldest oyster, many more follow them. After walking along the beach (a point is made of the fact that the oysters are all neatly shod despite having no feet), they rest on a low rock. After bringing bread, pepper, and vinegar the Walrus and the Carpenter are revealed to be predatory and eat all of the oysters. The Walrus expresses some compunction towards the oysters but eats them anyways, while the Carpenter dispassionately asks for more bread and complains that the butter is spread too thickly. After hearing the poem, the good-natured Alice attempts to determine which of the two leading characters might be the more sympathetic, but is thwarted by the twins' further interpretation:

"I like the Walrus best," said Alice: "because you see he was a little sorry for the poor oysters."
"He ate more than the Carpenter, though," said Tweedledee. "You see he held his handkerchief in front, so that the Carpenter couldn't count how many he took: contrariwise."
"That was mean!" Alice said indignantly. "Then I like the Carpenter best—if he didn't eat so many as the Walrus."
"But he ate as many as he could get," said Tweedledum.
This was a puzzler. After a pause, Alice began, "Well! They were both very unpleasant characters—"

All content from Kiddle encyclopedia articles (including the article images and facts) can be freely used under Attribution-ShareAlike license, unless stated otherwise. Cite this article:
The Walrus and the Carpenter Facts for Kids. Kiddle Encyclopedia.