Thelymitra cyanea, commonly known as the veined sun orchid in Australia and as the swamp sun orchid or striped sun orchid in New Zealand, is a species of orchid which is native to New Zealand and south-eastern Australia. It has a single erect, fleshy, channelled leaf and up to five bright blue flowers with darker blue veins. It is usually found growing in swamps, sphagnum bogs, and subalpine herbfields, often in clonal colonies. 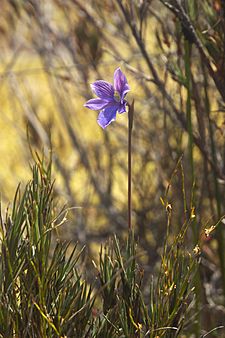 The veined sun orchid was first formally described in 1840 by John Lindley and given the name Macdonaldia cyanea. The description was published in his book A Sketch of the Vegetation of the Swan River Colony. In 1873 George Bentham changed the name to Thelymitra cyanea and published the change in Flora Australiensis. The specific epithet (cyanea) is derived from the Ancient Greek word kyanos meaning "dark blue".

Thelymitra cyanea is widespread and often common in many parts of south-eastern Australia and New Zealand. It grows in damp to wet boggy places, mainly in montane and subalpine habitats. In New Zealand it is widespread on the North, South and Chatham Islands. In New South Wales it is found on the tablelands south from Ebor, in south-eastern Victoria and in Tasmania. In South Australia it is restricted to near Mount Compass.

This orchid is widespread and common, but listed as "endangered" in South Australia where most of its former habitat has been drained and is now under cultivation.

All content from Kiddle encyclopedia articles (including the article images and facts) can be freely used under Attribution-ShareAlike license, unless stated otherwise. Cite this article:
Thelymitra cyanea Facts for Kids. Kiddle Encyclopedia.