Themisto or Jupiter XVIII, is a small prograde non-spherical moon of Jupiter. It was found in 1975, lost, and then refound in 2000.

Themisto was first found by Charles T. Kowal and Elizabeth Roemer on September 30, 1975, reported on October 3, 1975 and designated S/1975 J 1. However, not enough observations were made to establish an orbit and it was subsequently lost.

Themisto appeared as a footnote in astronomy textbooks into the 1980s. Then, in 2000, a seemingly new moon was found by Scott S. Sheppard, David C. Jewitt, Yanga R. Fernández and Eugene A. Magnier, and was designated S/2000 J 1. It was soon confirmed that this was the same as the 1975 object. The Sheppard et al. announcement was immediately correlated with an August 6 2000 observation by the team of Brett J. Gladman, John J. Kavelaars, Jean-Marc Petit, Hans Scholl, Matthew J. Holman, Brian G. Marsden, Philip D. Nicholson and Joseph A. Burns — an observation that was reported to the Minor Planet Center but not published as an IAU Circular (IAUC).

In October 2002 it was officially named after Themisto, daughter of the river god Inachus by Zeus (Jupiter) in Greek mythology. 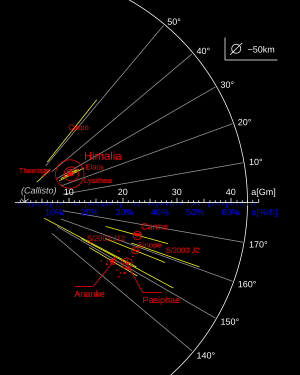 Diagram illustrating Themisto's orbit (top left) among those of the other non-spherical moons of Jupiter. The moons above the horizontal axis are prograde, the moons beneath it are retrograde. The yellow segments extend from the pericentre to the apocentre, showing the orbital eccentricity.

Themisto's orbit is unusual. Unlike most of Jupiter's moons, which orbit in groups, Themisto orbits alone, midway between the Galilean moons and the first group of prograde irregulars.

Themisto is about 8 kilometers in diameter (assuming an albedo of 0.04)

All content from Kiddle encyclopedia articles (including the article images and facts) can be freely used under Attribution-ShareAlike license, unless stated otherwise. Cite this article:
Themisto (moon) Facts for Kids. Kiddle Encyclopedia.