Origins of Thomas and Friends

Day out with Thomas 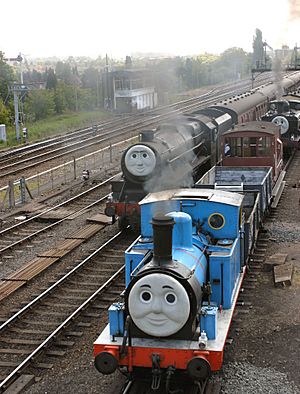 "Day out with Thomas", is a marketing name used by HiT Entertainment for special events held at heritage railways in the UK. The characteristic features of these events include locomotives wearing 'faces' to resemble 'Thomas' characters, and a "Fat Controller" character, usually performed by one of the railway's volunteers. The general idea is that the public have the chance to ride in a train pulled by 'Thomas' or one of his friends.

In the US the name also refers to "Come Ride the Rails with Thomas" which is a US tour by real trains modelled after Thomas the Tank Engine. The Thomas engine visits various historic railroads across the United States allowing visitors to play games, meet Sir Topham Hatt and to ride on a passenger car pulled by the engine. HiT Entertainment sponsors the event to promote the Thomas and Friends brand.

In the Netherlands is also a "Day out with Thomas", Een dag uit met Thomas, and is held at the South Limburg Railway Compagny a heritage railway in Simpelveld in the South of the Netherlands in the province of Limburg. The Thomas locomotive is shipped from the UK. The South Limburg Railway Compagny has its own Diesel locomotive.

From 2007 until 2017, Drusilla's Park near Alfriston, Sussex, England opened a railway ride featuring Thomas, Annie and Clarabel. The track runs through the Zoo Park and also features James, Diesel, Cranky and the Fat Controller.

For the 2008 & 2009 Season, Dutch Wonderland in Lancaster, Pennsylvania, USA, featured a 'Thomas and Friends Live' production.

A wide range of merchandise has been manufactured to cash in on the success of the series. The most popular and wide-ranging items of merchandise are the models of the characters, which have been produced in many different ranges, some including accompanying railway systems. Other popular products include videos, books and magazines, and computer games. Thomas merchandise has also included such items as audiobooks, annuals, colouring and activity books, jigsaws, board games, stationery, photo notebooks, clothing, cutlery, household items such as curtains, duvet covers and lampshades, and even soft drinks and spaghetti shapes.

With the popularity of the Thomas the Tank Engine and Friends TV series among children, Thomas-based merchandise has proven very lucrative. At least 5 different categories of trains and tracks exist: "Take Along Thomas" with grey tracks; TrackMaster battery-operated engines with brown tracks (previously Tomy with blue track); Brio-type wooden engines with wooden rails and roads (by ELC and others); electric model railway (produced in OO gauge by Hornby and Bachmann, N gauge by Tomix, O gauge by Lionel, and (from 2010) G-scale from Bachmann); and Lego engines and tracks. Merit Toys also produced some larger scale battery-powered engines with carriages and wagons in the 1980s, which ran on red tracks. Complementary videos, DVDs, books, games, puzzles, stationery, clothing and household items have also been produced.

In January 1987, a number of Thomas toys were recalled after test found lead content in the paint was up to 90 times the legally permitted level. The toys were imported by ERTL (UK) from China.

Main page: Day out with Thomas

Mattel (which, in 2017, took over HiT Entertainment which also acquired Gullane Entertainment (formerly the Britt Allcroft Company) in 2002) licenses "Day out with Thomas" events all over the world, at which visitors to heritage railways can meet and ride on a train hauled by a replica "Thomas".

As none of the E2 Class survived into preservation, various other classes have been adapted to resemble Thomas. Replicas are based on alternative 0-6-0 format engines such as Hunslet Austerity 0-6-0ST number 3781, which was converted from a saddle-tank to a side-tank design by fabricators of the Mid-Hants Railway to create No. 1 "Thomas" in 1994. The Strasburg Rail Road in Lancaster, PA (USA) built and featured their No. 1 "Thomas" since 1999 in the US and announced their introduction of "Percy, the Small Engine" at the "Day Out With Thomas" event on 13 September 2014.

Due to the increasing licensing fees and many other restrictions imposed by HiT including the need for "Sir Topham Hatts" to have auditions and the requirement for intensive Criminal Records Bureau checking, many heritage railways in the UK and overseas have reluctantly decided to withdraw from running "Thomas" days, thus reducing the income stream to these organisations.

An international tour featuring Thomas and his driver was completed in 2005 in honour of the 60th anniversary of the original stories. Former US President George H.W. Bush dedicated the Presidential Train during a ceremony in 2005.

A "real" Thomas was used in a special play, The Queen's Handbag, staged to celebrate the 80th birthday of Queen Elizabeth II, starring well-loved characters from children's literature. In the play the near life-sized Thomas carried Sophie Dahl to the stage to meet Sir Topham Hatt (Jonathan Ross) at the beginning of the show. The same Thomas had previously been used in the All Aboard Live Tour.

In June and July 2001, the National Autistic Society conducted a survey of 81 parents of children with autism and Asperger syndrome to investigate their putative 'special relationship' with Thomas the Tank Engine. The survey confirmed the organisation's assumption from anecdotal evidence that children with autism spectrum disorders associate far more strongly with Thomas the Tank Engine than with other children's characters.