The son of a farmer and public house owner, Patrick Kelly, and Margaret Divilly, Thomas Joseph Kelly was born in Mountbellew, County Galway, in 1833. Having received a better than average education, it was originally intended that he should become a priest and attended St. Jarlath's College in Tuam. At school, he came to be influenced by his teacher Michael Joseph MacCann (1824–1883) who, in 1843, wrote "O'Donnell Abu", a ballad about Rory O'Donnell, 1st Earl of Tyrconnell. This influence kindled patriotism in Kelly.

After serving an apprenticeship in the printing trade in Loughrea, at the age of eighteen, he emigrated to New York City, arriving on the ship Castillian on 27 March 1851, where he worked as a printer, and joined the Printer's Union in New York City. He joined the National Guard in New York and received basic military training. He later joined the Emmet Monument Association, an Irish-American Irish republican group.

In 1857, Kelly went to Nashville, Tennessee, where he worked as a foreman for the S. W. Publishing House. Soon afterwards he started the Nashville Democrat, which supported the presidential campaign of Stephen A. Douglas in the Presidential election of 1860. Following the outbreak of the American Civil War, Kelly, a supporter of the Union, chose to leave Nashville for the North. In doing this, he lost his savings and printing business.

A wanted ad for Kelly in Harper's Weekly

En route to join the famous Irish 69th Infantry Regiment, he heard about the Irish 10th Ohio Infantry, and enlisted with them for its initial three months, and then re-enlisted for an additional three years. He served in Company "C", where his military knowledge and ability was soon recognized and he was promoted to Sergeant. By the end of the summer of 1861 he was functioning as First Sergeant of Company "C". Although shot in the jaw at the Battle of Carnifex Ferry in Western Virginia, 10 September 1861, he volunteered to return to duty before the end of the year. Part of his jaw and three teeth were destroyed by a bullet that lodged in the muscles of the left side of his neck, from which it was removed surgically. It has been suggested that the goatee beard, which appears in all of his pictures was grown to hide what could have been a disfiguring scar.

Kelly was commissioned in January 1862, and later seconded to the staff of Major General George Henry Thomas (later "The Rock of Chickamauga") of the XIV Corps, United States Army of the Cumberland, as a Signal Officer. He was promoted to Captain on 17 March 1863, becoming Chief Signal Officer. During this period his regimental commander requested his reassignment back to the 10th Ohio, in order that he might take command of one of the regiment's manoeuvre battalions. General Thomas refused the request, writing that he could not spare Kelly from his duties. On 30 April 1863, Kelly was administratively transferred, on the books of the 10th Ohio from Company "C" to Company "I", while continuing to serve at XIV Corps Headquarters. General Thomas's need for Kelly's services was trumped by a new Army regulation requiring that all officers of the Signal Corps have university degrees by the following February. This being the case (although too late for battalion command), Kelly again requested transfer back to his regiment. On 19 August 1863 he was ordered to return to the "Bloody Tenth" as Captain, Company "I", from which he was mustered out with the rest of the 10th Ohio on 17 June 1864. 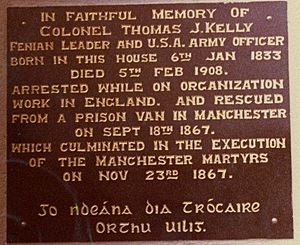 After the end of the war, Kelly learned about the establishment of the Irish Republican Brotherhood (IRB) and joined the movement in New York. The Fenian Brotherhood later dispatched him to Ireland as an envoy to meet with IRB leader James Stephens. He returned to New York in April 1866. He became Deputy to Stephens [the Irish leader of the Fenians] in May 1866, and brought about Stephens' downfall later in the year.

After Stephens was deposed as IRB leader in December 1866, Kelly, as "Deputy Central Organiser of the Irish Republic", took control of the organisation. Kelly participated in helping Stephens escape from Richmond Jail. He also planned the raid on Chester Castle, scheduled for 11 February 1867, which proved abortive.

Kelly played an important role in the failed Fenian Rising of 1867 and was arrested. He later escaped, and in August 1867, called a secret IRB convention at Manchester, where he was declared Chief Organiser of the Irish Republic (COIR), in succession to Stephens.

Kelly was wanted by the British authorities, and for a time managed to evade capture. But on 11 September 1867, Kelly, along with Timothy Deasy, was arrested in Manchester for loitering. Though they gave their names as Martin Williams and John Whyte, they were soon identified and charged with more serious offences. Seven days later, Kelly and Deasy were being transferred from the courthouse to the county jail on Hyde Road, Manchester, when about thirty supporters attempted to free them. During the attack, police sergeant Charles Brett, was killed, but Kelly and Deasy managed to escape. Three men arrested in connection with the attack were later executed, and thereafter known as the Manchester Martyrs. Both Kelly and Deasy escaped to the United States and were never recaptured. Kelly later obtained employment in the New York custom-house.

He was later associated with the Irish Republican Brotherhood in New York. In 1871, he was secretary to the committee which welcomed the "Cuba Five", a group of released Fenian prisoners, to New York.

All content from Kiddle encyclopedia articles (including the article images and facts) can be freely used under Attribution-ShareAlike license, unless stated otherwise. Cite this article:
Thomas J. Kelly (Irish nationalist) Facts for Kids. Kiddle Encyclopedia.