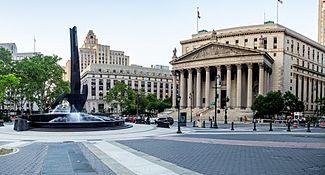 Triumph of the Human Spirit at Foley Square in 2019

Foley Square is a street intersection in the Civic Center neighborhood of Lower Manhattan, New York City, which contains a small triangular park named Thomas Paine Park. The space is bordered by Worth Street to the north, Centre Street to the east, and Lafayette Street to the west, and is located south of Manhattan's Chinatown and east of Tribeca. It was named after a prominent Tammany Hall district leader and local saloon owner, Thomas F. "Big Tom" Foley (1852–1925).

Foley Square sits on part of the former site of Collect Pond, specifically the smaller portion known as "Little Collect Pond" which used to lie to the south of Collect Pond proper. This was one of the original fresh water sources for the city, but in 1811 was drained and filled in because it had become severely polluted and implicated in typhus and cholera outbreaks. The neighborhood around the pond was the notorious Five Points neighborhood, home of many gangs.

Also featured in the square are five bronze historical medallions, set flush into areas of the surrounding sidewalks, telling the history of the park and its surroundings, including one for the "Negro Burial Ground", an 18th-century African-American burial ground unearthed during construction of the square. This burial ground has been preserved as the African Burial Ground National Monument.

Tilted Arc, a public art installation by Richard Serra, was displayed in the square from 1981 until it was removed amid controversy in 1989. In 2005, Thomas Paine Park was established as a part of the square.

Foley Square has been used several times for special purposes. It was used as a triage center on September 11, 2001. The Foley Square Greenmarket operates year-round at the corner of Centre Street between Worth and Pearl Streets, and offers baked goods as well as local farm picked fruits and vegetables which are guaranteed to have been harvested within three days of sale. Because of its proximity to Chinatown, Foley Square is often host to a large group of people performing tai chi in the mornings.

On November 17, 2011, Foley Square was the site of a protest which was part of the Occupy Wall Street movement, which took place after the protestors had been removed from nearby Zuccotti Park. Thousands of people attended the rally, including members of a dozen different unions.

Foley Square has been the site of many other protests and rallies. In December 2014, many thousands gathered there to protest the decision in the death of Eric Garner. In November 2016, in protest of the Dakota Access Pipeline and in solidarity with Standing Rock water protectors, dozens of the thousands of protesters were arrested. In January 2017, to protest the inauguration of Donald Trump, a collection of activist groups organized a rally titled "NYC Stand Against Trump", held at Foley Square.

All content from Kiddle encyclopedia articles (including the article images and facts) can be freely used under Attribution-ShareAlike license, unless stated otherwise. Cite this article:
Foley Square Facts for Kids. Kiddle Encyclopedia.