Kids Encyclopedia Facts
This page is about the chocolate company. For other uses, see Thornton (disambiguation).

Thorntons is a British chocolate brand, which was established by Joseph William Thornton and his father, in 1911. The company was bought by the Italian firm Ferrero in June 2015 for £112m.

Since Cadbury became part of the Mondelez International, Thorntons is the largest confectionery only parent company in Britain. It has established toffee and fudge lines, but after post war rationing ended, the group shifted its specialism into chocolate, especially its Continental, Swiss and Belgian chocolate sets, which form the bulk of sales. 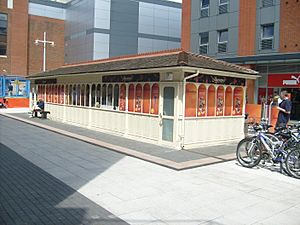 This outlet plays on the brand's long history, being in a small, decorative tram shelter in Portsmouth in 2008

Thorntons began in Sheffield in 1911, the business being started by Joseph William Thornton (1870–1919), who co opened the company's first shop, at 159 Norfolk Street. Norman, his son, became the manager, at the age of just 15. Later in the companies history, Peter Thornton (grandson of the founder) served as chairman, but was dismissed from the role in June 1987. 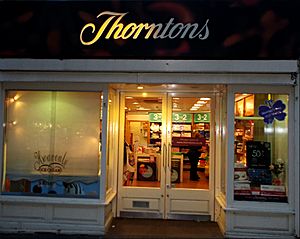 A Thorntons shop in London in 2015

After rapid expansion, the results of 2009 showed turnover increasing to £214.8 million, but operating profit decreasing to £7.94 million. A perennial seasonality in sales disappointed strategists and employees. 35% of the sales were in the seven week period before Christmas, and 10%, shortly before Easter Sunday.

The scale of impact of this, on manufacturing and service, are more pronounced than the average in the food sector, necessitating temporary staffing. Jonathon Hart joined the business, as chief executive officer, in January 2011. Following another resultant strategic review, in June 2011, Thorntons announced it would close between 120 and 180, of its shops.

It was announced in June 2015, that chocolate producer Ferrero would buy Thorntons, for £112 million. Thorntons Ltd are 75% owned by Ferholding UK Ltd, which, in turn, is controlled by Giovanni Ferrero (who holds over 50% of voting rights).

With Ferrero investment into the business to try to increase revenue, through the financial year of 2017 to 2018 sales and production increased. Fewer new shops were opened with some existing locations diversified into cafés, selling a range of both eat-in and take-away food and drinks alongside the traditional confectionary lines. In 2020, Thorntons won the Lausanne Index Prize - Bronze Award.

On 15 March 2021, it was announced that all 61 remaining Thorntons retail stores were to close after UK government COVID-19 pandemic restrictions lifted. The pandemic restrictions had meant that all Thorntons retail stores had closed for much of 2020, and the business was now going to restructure in order to move sales both online and to focus retailing on supermarket distribution channels. While announcing that the physical Thorntons stores would close, the company stated that it had seen a 70% increase in sales though the business website compared to the previous year. 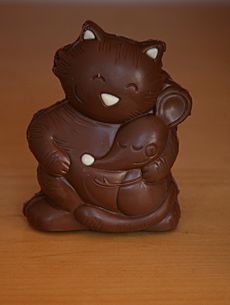 Hollow and solid cats, rabbits and seasonal shapes by the company, often have fine white, or dark chocolate details. (2008)

The current, main advertising slogans are:

The promotion sought to regain lost custom to competition, and a move away from deluxe chocolate gifts, in recent festive sales, as well as poor sales over the summer of 2006.

All content from Kiddle encyclopedia articles (including the article images and facts) can be freely used under Attribution-ShareAlike license, unless stated otherwise. Cite this article:
Thorntons Facts for Kids. Kiddle Encyclopedia.