Tie Me Kangaroo Down, Sport facts for kids

"Tie Me Kangaroo Down, Sport" is a song written by Australian singer Rolf Harris in 1957 which became a hit around the world in the 1960s in two recordings (1960 in Australia, New Zealand and the United Kingdom for the original, and 1963 with a re-recording of his song in the United States). Inspired by Harry Belafonte's calypsos, most noticeably "The Jack-Ass Song", it is about an Australian stockman on his deathbed.

Harris originally offered four unknown Australian backing musicians 10% of the royalties for the song in 1960, but they decided to take a recording fee of £28 among them because they thought the song would be a flop.

The recording peaked at No. 1 in the Australian charts and was a Top 10 hit in the UK in 1960. In 1963, Harris re-recorded the song in the UK with George Martin as producer, and this remake of the song reached No. 3 on the US Billboard Hot 100 chart and spent three weeks atop the easy listening chart in 1963. "Tie Me Kangaroo Down, Sport" was a surprise hit on the US R&B chart where it went to No. 19. Harris re-recorded his song a second time along with The Wiggles in 2000 with the introductory verse and the verse mentioning the stockman's death omitted. It is still popular today as a children's song.

The distinctive sound of Harris's original recording was achieved by the use of an instrument of his own design called the "wobble board"—a two-by-three-foot piece of hardboard.

The story of the song

The opening recitation by Harris:

There's an old Australian stockman, lying, dying,
and he gets himself up on one elbow,
and he turns to his mates,
who are gathered 'round him and he says...

is similar to the first verse of a song, The Dying Stockman, collected in Australia by Banjo Paterson and published in 1905:

A strapping young stockman lay dying,
His saddle supporting his head;
His two mates around him were crying,
As he rose on his pillow and said...

In Harris's version, a dying Australian stockman instructs his friends to take care of his affairs when he is gone. The first of these is to watch his wallabies feed, then to tie his kangaroo down, since they jump around (which is the chorus). "Sport" is an Australian term of address, alluding to "good sport", which often, as in this case, praises someone for carrying out a small favour one is asking of them. The lyrics mention animals and objects associated with Australia, including cockatoos, koalas, platypuses, and didgeridoos. His last dying wish is "Tan me hide when I'm dead, Fred". By the end of the song, the stockman has died and his wish has been carried out: "So we tanned his hide when he died, Clyde, and that's it hanging on the shed".

Many parodies, variations, and versions tailored for different countries exist of the song, and Harris performs excerpts from some of them on a 1969 live album released only in the UK called Rolf Harris Live at the Talk of the Town (EMI Columbia SCX 6313). He recorded a version with The Beatles on 18 December 1963 for the BBC programme From Us To You Say The Beatles in which each Beatle is included in the lyrics. It was broadcast on 26 December.

The song is performed by Elvis Costello in a 2003 episode of Frasier. Costello, playing the character of Ben, played the song in the Season 10 episode, "Farewell, Nervosa" accompanied by the character of Niles Crane playing maracas. 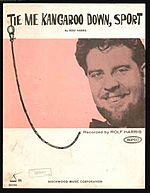 The fourth verse caused some controversy in 1964 because of its use of the word "Abo", an offensive slang term for Aboriginal Australians. The lyrics of this verse (not found on Rolf Harris's official website) were as follows:

The stockman thus emancipates his indigenous offsiders at his death, when they are "of no further use" to him. This verse does not feature in 21st-century versions of the song and, in a 2006 interview, Harris expressed regret about the racist nature of the original lyrics.

Rolf Harris performed the song during the Opening Ceremony of the 1982 Commonwealth Games in Brisbane, Queensland, Australia, with a special verse of lyrics written for the event; they are as follows:

All content from Kiddle encyclopedia articles (including the article images and facts) can be freely used under Attribution-ShareAlike license, unless stated otherwise. Cite this article:
Tie Me Kangaroo Down, Sport Facts for Kids. Kiddle Encyclopedia.