Kids Encyclopedia Facts
This page is about the building. For the ski area, see Timberline Lodge ski area.

Timberline Lodge is a mountain lodge on the south side of Mount Hood in Clackamas County, Oregon, about 60 miles (97 km) east of Portland. Constructed from 1936 to 1938 by the Works Progress Administration, it was built and furnished by local artisans during the Great Depression. Timberline Lodge was dedicated September 28, 1937, by President Franklin D. Roosevelt.

The National Historic Landmark sits at an elevation of 5,960 feet (1,817 m), within the Mount Hood National Forest and is accessible through the Mount Hood Scenic Byway. Publicly owned and privately operated, Timberline Lodge is a popular tourist attraction that draws two million visitors annually. It is notable in film for serving as the exterior of the Overlook Hotel in The Shining. 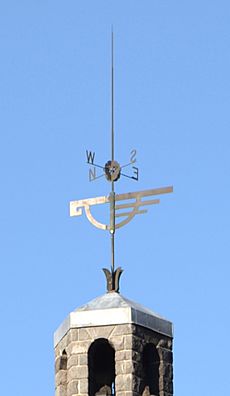 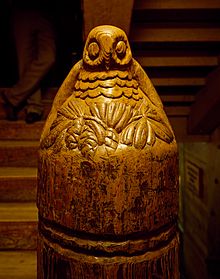 Purchased for $2.10 each, discarded cedar utility poles were repurposed as newel posts—19 of them crowned with carvings of area wildlife. 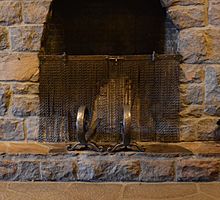 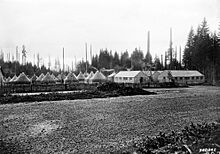 Each workman on Timberline Lodge gained proficiency in manual arts. He was a better workman, a better citizen, progressing by infinitely slow steps to the degree above him.

Timberline Lodge, a mountain lodge and resort hotel, is a four-story structure comprising approximately 40,000 square feet. The ground-level exterior walls are heavy rubble masonry, using boulders from the immediate area, and heavy timber is used from the first floor up. The central head house section is hexagonal and 60 feet in diameter, with a six-sided stone chimney stack 92 feet high and 14 feet in diameter. Each of the six fireplace openings—three on the ground floor, three on the first floor—is five feet wide and seven feet high. Two wings, running west and southeast, flank the head house. Oregon woods used throughout the building include cedar, Douglas fir, hemlock, western juniper and ponderosa pine.

The architect of record for Timberline Lodge is Gilbert Stanley Underwood, noted for the Ahwahnee Hotel and other lodges in the U.S. national park system. He produced the original designs. His central head house was modified from an octagon to a hexagon by U.S. Forest Service architect W. I. (Tim) Turner and a team comprising Linn A. Forrest, Howard L. Gifford and Dean R. E. Wright. A recent graduate of the University of Washington, forest service engineer Ward Gano was structural designer.

Timberline Lodge was constructed between 1936 and 1938 as a Works Progress Administration project during the Great Depression. Eighty percent of the WPA's $695,730 total expenditure on building costs paid for labor. Skilled building trade workers received 90 cents an hour; unskilled laborers received 55 cents an hour. Some of the skilled stonemasons on the project were Italian immigrants who had worked on the Historic Columbia River Highway and other roads in Oregon. About 100 construction workers were on site at a given time, and lived at a nearby tent city. Jobs were rotated to provide work to as many of the unemployed as possible.

Materials costs were minimized by the skillful use of recycled materials. Women wove draperies, upholstery and bedspreads, and hooked rugs were made from strips of old Civilian Conservation Corps camp blankets. Discarded cedar utility poles became newel posts with their crowns hand-carved into birds, bears and seals. Fireplace screens were fashioned from tire chains. Andirons and other iron work was forged from old railroad tracks. WPA workers used large timbers and local stone from the site.

"All classes, from the most elementary hand labor, through the various degrees of skill to the technically trained were employed," reported the WPA's Federal Writers' Project. "Pick and shovel wielders, stonecutters, plumbers, carpenters, steam-fitters, painters, wood-carvers, cabinet-makers, metal workers, leather-toolers, seamstresses, weavers, architects, authors, artists, actors, musicians, and landscape planners, each contributed to the project, and each, in his way, was conscious of the ideal toward which all bent their energies."

Federal Art Project contributions to the project were directed by Margery Hoffman Smith, Oregon Arts Project administrator, who created many designs for textiles and rugs. She designed the iconic "snow goose", the 750-pound bronze weather vane above the head house. Smith based the abstract forms incised into the lodge chimney on the art of the local Tenino people. Likely acquainted with William Gray Purcell, a fellow resident of Portland, Smith saw that the Prairie School aesthetic was carried through in tables, chairs, sectional sofas, columns, bedspreads, draperies, lampshades and pendant lighting fixtures. She commissioned murals, paintings and carvings from Oregon's WPA artists. 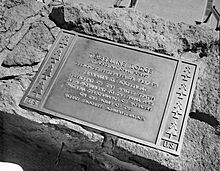 I am here to dedicate the Timberline Lodge and I do so in the words of the bronze tablet directly in front of me on the coping of this wonderful building:

Timberline Lodge, Mount Hood National Forest dedicated September 28, 1937, by the President of the United States as a monument to the skill and faithful performance of workers on the rolls of the Works Progress Administration.

During an inspection tour of government activities in the western U.S., President Franklin D. Roosevelt dedicated Timberline Lodge on September 28, 1937. In his remarks, he commented on the reasons for the project:

This Timberline Lodge marks a venture that was made possible by WPA, emergency relief work, in order that we may test the workability of recreational facilities installed by the Government itself and operated under its complete control.

Here, to Mount Hood, will come thousands and thousands of visitors in the coming years. Looking east toward eastern Oregon with its great livestock raising areas, these visitors are going to visualize the relationship between the cattle ranches and the summer ranges in the forests. Looking westward and northward toward Portland and the Columbia River, with their great lumber and other wood using industries, they will understand the part which National Forest timber will play in the support of this important element of northwestern prosperity.

Those who will follow us to Timberline Lodge on their holidays and vacations will represent the enjoyment of new opportunities for play in every season of the year. I mention specially every season of the year because we, as a nation, I think, are coming to realize that the summer is not the only time for play. I look forward to the day when many, many people from this region of the Nation are going to come here for skiing and tobogganing and various other forms of winter sports."

FDR and Eleanor Roosevelt enjoyed a celebratory luncheon that included salmon and huckleberry pie. In her My Day column, Mrs. Roosevelt praised the lodge's architectural features: "It is built exclusively of native products and by WPA labor. The interesting central fire place with its many openings is a feature I have seen in no other building of its kind and no where have I seen such big timbers used. All the furniture, all the hangings, all the iron work as well, were made by WPA workers. Here is a group of workers who have the makings of a handcraft organization and I hope their work will be appreciated. Mr. Griffith, the state WPA administrator, must be happy over the work done here."

Most work was complete at the time of the dedication. After some interior details were finished, the lodge opened to the public February 4, 1938.

Roosevelt's vision of winter sports at Timberline Lodge took hesitant steps the following year. A portable rope tow was installed, and construction began on the Magic Mile chairlift, which opened November 1939. Today, the lodge and its grounds are host to a ski resort also known as Timberline Lodge. It has the longest skiing season in the U.S., and is open for skiers and snowboarders every month of the year. Activities include skiing, snowboarding, walking, hiking and climbing. 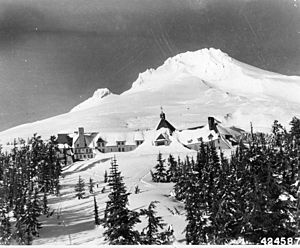 Closed during the winter of 1942–43 because of World War II, Timberline Lodge fell into decline.

Lifestyles Northwest published a story about the history of Timberline Lodge in its February 2005 issue, based heavily on interviews with the family who have operated the lodge for fifty years. The story noted that in the lodge's early years, it had had four different operators, none of which was willing or able to maintain it. By 1955 Timberline Lodge was closed and in disrepair.

Richard Kohnstamm, the patriarch of the family that currently operates it, remembered those difficulties as being due to financing problems arising from the fact that the government owned it. Kohnstamm decided to maintain the place as if he owned it himself; he lost money during his first five years of operation, but his timing turned out to be fortuitous, since he began operating it only a few years before skiing started exploding in popularity in the late 1950s. That popularity helped the family generate a profit starting in 1960. Kohnstamm, "the man who saved Timberline", died at the age of 80 on April 21, 2006. Kohnstamm's son Jeff is now the Area Operator of Timberline Lodge. 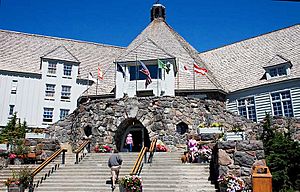 Timberline Lodge in the summer (2006)

All content from Kiddle encyclopedia articles (including the article images and facts) can be freely used under Attribution-ShareAlike license, unless stated otherwise. Cite this article:
Timberline Lodge Facts for Kids. Kiddle Encyclopedia.