Timeline of the name "Palestine" facts for kids 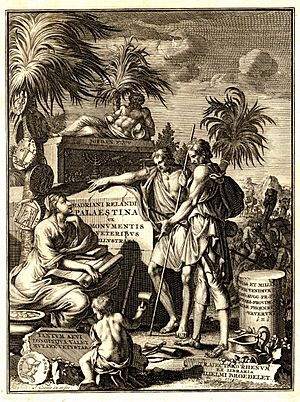 This article presents a list of notable historical references to the name Palestine as a place name in the Middle East throughout the history of the region, including its cognates such as "Filastin" and "Palaestina."

The term "Peleset" (transliterated from hieroglyphs as P-r-s-t) is found in five inscriptions referring to a neighboring people or land starting from circa 1150 BC during the Twentieth Dynasty of Egypt. The first known mention is at the Medinet Habu temple which refers to the Peleset among those who fought against Egypt during Ramesses III's reign, and the last known is 300 years later on Padiiset's Statue. The Assyrians called the same region "Palashtu/Palastu" or "Pilistu," beginning with Adad-nirari III in the Nimrud Slab in c. 800 BC through to an Esarhaddon treaty more than a century later. Neither the Egyptian nor the Assyrian sources provided clear regional boundaries for the term.

The term "Palestine" first appeared in the 5th century BC when the ancient Greek historian Herodotus wrote of a "district of Syria, called Palaistinê" between Phoenicia and Egypt in The Histories. Herodotus applied the term to both the coastal and the inland regions such as the Judean mountains and the Jordan Rift Valley. Later Greek writers such as Aristotle, Polemon and Pausanias also used the word, which was followed by Roman writers such as Ovid, Tibullus, Pomponius Mela, Pliny the Elder, Dio Chrysostom, Statius, Plutarch as well as Roman Judean writers Philo of Alexandria and Josephus. The word is not found on any Hellenistic coin or inscription, and is first known in official use in the early second century AD.

In 135 AD, the Greek "Syria Palaestina" was used in naming a new Roman province from the merger of Roman Syria and Roman Judaea after the Roman authorities crushed the Bar Kokhba Revolt. Circumstantial evidence links Hadrian to the renaming of the province, which took place around the same time as Jerusalem was refounded as Aelia Capitolina, but the precise date of the change in province name is uncertain. The common view that the name change was intended to "sever the connection of the Jews to their historical homeland" is disputed.

Around the year 390, during the Byzantine period, the imperial province of Syria Palaestina was reorganized into Palaestina Prima, Palaestina Secunda and Palaestina Salutaris. Following the Muslim conquest, place names that were in use by the Byzantine administration generally continued to be used in Arabic. The use of the name "Palestine" became common in Early Modern English, was used in English and Arabic during the Mutasarrifate of Jerusalem. In the 20th century the name was used by the British to refer to "Mandatory Palestine," a territory from the former Ottoman Empire which had been divided in the Sykes–Picot Agreement and secured by Britain via the Mandate for Palestine obtained from the League of Nations. Starting from 2013, the term was officially used in the eponymous "State of Palestine." Both incorporated geographic regions from the land commonly known as Palestine, into a new state whose territory was named Palestine.

All content from Kiddle encyclopedia articles (including the article images and facts) can be freely used under Attribution-ShareAlike license, unless stated otherwise. Cite this article:
Timeline of the name "Palestine" Facts for Kids. Kiddle Encyclopedia.