Timpson is a city in Shelby County, Texas, United States. The population was 1,155 at the 2010 census. The community is named after T.B Timpson, a railroad engineer.

Timpson was founded in 1885 upon the arrival of the Houston, East and West Texas Railway. It reached its maximum population in 1925 when it was important in the shipping of lignite.

The town became well known in the 1930s and 40's via the popularity of the Tex Ritter song, 'Tenaha, Timpson, Bobo, and Blair', which refers to the string of towns in Shelby County. 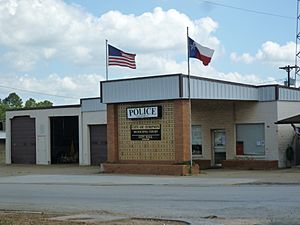 Like all "railroad" towns Timpson was laid out with the railroad, and not north and south as most towns are. Therefore, the streets run at an angle of 43 degrees "off". When the town was incorporated, Charlie Noblet's map was adopted and is now on record at the county seat, and is the official map of the city today.

There were 456 households, out of which 27.2% had children under the age of 18 living with them, 38.6% were married couples living together, 16.9% had a female householder with no husband present, and 40.8% were non-families. 36.6% of all households were made up of individuals, and 24.8% had someone living alone who was 65 years of age or older. The average household size was 2.40 and the average family size was 3.18.

The most popular game fish at Timpson Reservoir is the largemouth bass. Numbers of bass are relatively high and an excellent fishery exists. Due to the 14-21 inch slot limit, Timpson produces a good number of trophy-sized bass. Crappie and catfish are present in the reservoir, but numbers are relatively low and few anglers target these species. Bluegill and redear sunfish provide fair fishing, especially for youth or inexperienced anglers.

Public education in the city of Timpson is provided by the Timpson Independent School District and home to the Timpson High School Bears.

All content from Kiddle encyclopedia articles (including the article images and facts) can be freely used under Attribution-ShareAlike license, unless stated otherwise. Cite this article:
Timpson, Texas Facts for Kids. Kiddle Encyclopedia.