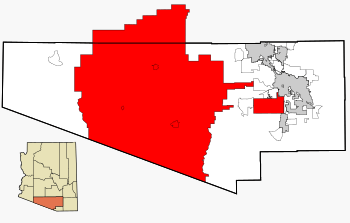 Map shows the location of the majority of the Tohono O'odham Nation in Pima County, highlighting the large Tohono O'odham Reservation as well as the smaller San Xavier Reservation in red. The non-contiguous segments in Maricopa and Pinal counties are not shown.

The land is also site of the Quinlan and Baboquivari Mountains, which include Kitt Peak, and the Kitt Peak National Observatory and telescopes, as well as Baboquivari Peak. These astronomical sites are under lease from the Tohono O'odham Nation. The lease was approved by the council in the 1950s, for a one-time payment of US$25,000 plus $10 per acre per year.

All content from Kiddle encyclopedia articles (including the article images and facts) can be freely used under Attribution-ShareAlike license, unless stated otherwise. Cite this article:
Tohono O'odham Indian Reservation Facts for Kids. Kiddle Encyclopedia.