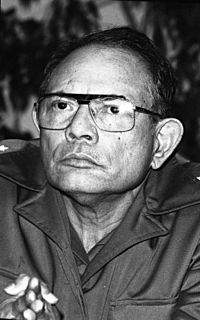 Tomás Borge Martínez (13 August 1930 – 30 April 2012) was a Nicaraguan politician and writer. He was the cofounder of the Sandinista National Liberation Front in Nicaragua and was Interior Minister of Nicaragua during one of the administrations of Daniel Ortega.

Borge also held the titles of "Vice-Secretary and President of the FSLN", member of the Nicaraguan Parliament and National Congress, and Ambassador to Peru.

All content from Kiddle encyclopedia articles (including the article images and facts) can be freely used under Attribution-ShareAlike license, unless stated otherwise. Cite this article:
Tomás Borge Facts for Kids. Kiddle Encyclopedia.