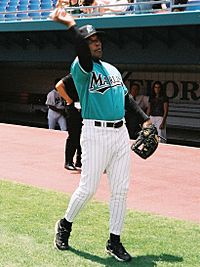 Antonio Nemesio (Sánchez) Taylor (December 19, 1935 – July 16, 2020) was a Cuban baseball second baseman. He was born in Havana. He played nineteen seasons in Major League Baseball (MLB). He played for the Chicago Cubs, Philadelphia Phillies, and Detroit Tigers from 1958 until 1976. He batted and threw right-handed and also played third base and first base.

All content from Kiddle encyclopedia articles (including the article images and facts) can be freely used under Attribution-ShareAlike license, unless stated otherwise. Cite this article:
Tony Taylor (baseball) Facts for Kids. Kiddle Encyclopedia.