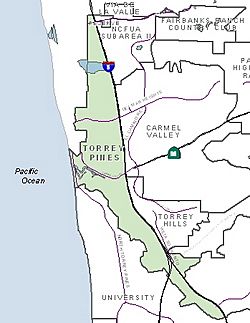 Torrey Pines is a community of 2,600 acres (1,100 ha) in the northern coastal area of San Diego, California, residential with large areas of office space along I-5.

Del Mar Terraces and the Del Mar Heights are neighborhoods within this community.

All content from Kiddle encyclopedia articles (including the article images and facts) can be freely used under Attribution-ShareAlike license, unless stated otherwise. Cite this article:
Torrey Pines, San Diego Facts for Kids. Kiddle Encyclopedia.