Sorrento Valley is a neighborhood of San Diego, California. It is located about 17 mi (27 km) north of Downtown San Diego and its main airport, Lindbergh Field. It is roughly bounded by Interstate 5 and Interstate 805, Camino Santa Fe to the east, the Los Peñasquitos Canyon Preserve to the north and Miramar Road to the south, as shown on the San Diego Police Department's neighborhood map. It encompasses Sorrento Mesa and is part of the San Diego Unified School District. 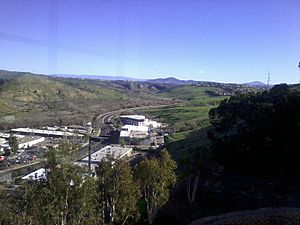 While originally envisioned and zoned for industrial use, Sorrento Valley is now home to over 5,000 residents spread across three major single family home and condominium developments. Sorrento Valley is known as a center for high tech, biotech and scientific research, aided by its close proximity to the University of California, San Diego. It is part of the city's Mira Mesa, Torrey Pines, and University community planning areas.

The West edge of Sorrento Valley contains the I-5 and I-805 freeways merge and/or split. The Sorrento Valley train station is a stop for the Coaster commuter and Amtrak Pacific Surfliner rail lines, which provide train links to Oceanside and Downtown San Diego.

All content from Kiddle encyclopedia articles (including the article images and facts) can be freely used under Attribution-ShareAlike license, unless stated otherwise. Cite this article:
Sorrento Valley, San Diego Facts for Kids. Kiddle Encyclopedia.