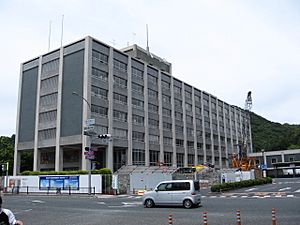 Tottori Prefecture government building in the city of Tottori

Tottori (鳥取市code: ja is deprecated , Tottori-shi) is the capital capital city of Tottori Prefecture on the island of Honshu.

It has been recognized as a special city since 2005.

Tottori Castle was established by Yamana Nobumichi in 1545. The castle town grew at the base of the mountain where the castle was built.

Tottori was incorporated as a city on October 1, 1889.

All content from Kiddle encyclopedia articles (including the article images and facts) can be freely used under Attribution-ShareAlike license, unless stated otherwise. Cite this article:
Tottori, Tottori Facts for Kids. Kiddle Encyclopedia.