Tower is a city located in Saint Louis County, Minnesota, United States. As of the 2010 census, the city had a total population of 500.

Tower is located near the southern shore of Lake Vermilion.

The city was incorporated March 13, 1889, which makes it the oldest city in the Arrowhead region. It owes its establishment to the Soudan Mine, and was named after mining financier Charlemagne Tower. Tower is home to the Tower Train Museum; near the museum is McKinley Monument, the first erected in honor of former U.S. President William McKinley shortly after his assassination in 1901. President McKinley was in office from 1897 to 1901.

Tower set the Minnesota record for coldest temperature on February 2, 1996, when the temperature dropped to -60 °F (-51 °C). This was the lowest temperature ever recorded in the United States east of the Great Plains. Tower and the Embarrass Valley to the south are the coldest inhabited locations in the Lower 48 states, based on average winter temperatures.

Tower has a humid continental climate (Köppen Dfb), with long, bitterly cold winters and humid and warm summers. January averages 5.0 °F or −15.0 °C, and lows reach 0 °F or −17.8 °C on 67 nights annually. Highs only reach the freezing point 18–19 days during December to February, and in combination with a seasonal snowfall of 67.2 inches or 1.71 metres, snow cover is thick and long−lasting. Spring, and more especially autumn, are short but mild transition seasons. July averages 63.9 °F or 17.7 °C, with highs reaching 90 °F or 32.2 °C on only 3.2 days annually, with only about four-fifths of all years seeing temperatures that high. Summer nights are cool despite the warm days, with the average window for freezing temperatures August 25 thru June 22. Precipitation averages about 27.77 inches or 705.4 millimetres per year, and is concentrated in the warmer months. The all−time record high temperature is 101 °F (38.3 °C), while the all−time record low is −60 °F (−51.1 °C), a range of 161 °F (89 °C).

There were 265 households, of which 20.4% had children under the age of 18 living with them, 32.5% were married couples living together, 10.2% had a female householder with no husband present, 4.9% had a male householder with no wife present, and 52.5% were non-families. 45.7% of all households were made up of individuals, and 20% had someone living alone who was 65 years of age or older. The average household size was 1.89 and the average family size was 2.61. 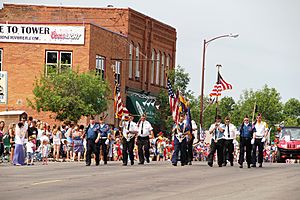 Fourth of July celebration in Tower

Fortune Bay Resort and Casino is located a few miles west of Tower. It is near Lake Vermilion, a well-known lake which attracts tourists and locals alike. The casino is owned and operated by the Bois Forte Band of Chippewa.

Tower has a simple sports ground with bleacher stands, close by the Tower School. At Lake Vermillion, a run tournament named after the lake is staged every year.

Tower is part of the St. Louis County school district based in Virginia, Minnesota. In town there is the Tower-Soudan Elementary School that serves students K–6. Students 7–12 are transported to other secondary schools nearby as Tower-Soudan does not have a secondary school at this point.

Outside of the district, Tower has a public charter school that serves students 7–12, called Vermilion Country School. Based in the old PowerRain building, this project-based secondary school was set up by parents and townspeople who advocated for a local secondary school. Opened in 2013, VCS graduated their first 6 seniors in May 2014.

All content from Kiddle encyclopedia articles (including the article images and facts) can be freely used under Attribution-ShareAlike license, unless stated otherwise. Cite this article:
Tower, Minnesota Facts for Kids. Kiddle Encyclopedia.