Established in 1892 as a national park, the land remained degraded until 1961, when it was declared a State Game Reserve and an extensive revegetation program was begun. It is now full of mature native vegetation and reintroduced native species, such as koalas, wallabies and possums. The Worn Gundidj Aboriginal Cooperative manages the park in partnership with Parks Victoria.

Aboriginal Australian kitchen middens at Tower Hill show 5000-year-old Tasmanian devil bones. Greenstone axe heads and other artefacts excavated from the tuff indicated that Aboriginal people were resident in the area when the volcano erupted, dated in 1990 as c.25,000 BP. However, it was reported in 2020 that new evidence, which had come to light by using a more sophisticated method of dating than previously, known as radiometric dating, showed that both Budj Bim and Tower Hill volcanoes erupted at least 34,000 years ago; moreover, based on the axe head found in 1947, people were in the area before those eruptions.

The local people were the Koroitgundidj, for whom the area was a valuable source of food. Their descendants still retain special links with this country.

After European settlement, much of the vegetation was cleared, and the land used for farming and quarrying. Tower Hill became Victoria's first national park in 1892, but degradation of the landscape and native wildlife habitats continued until it was declared a State Game Reserve in 1961, when a major revegetation program began. The program used an 1855 painting by Austrian-born artist Eugene von Guerard as a guide for re-planting appropriate species. By 1981, about 25,000 trees and shrubs had been planted, along with herbs, grasses and rushes, and native animals were reintroduced. Populations of koalas, grey kangaroos, wallabies, echidnas, brushtail and ringtail possums, sugar gliders and over 160 species of bird were successfully established in the 1980s, and are still there today. 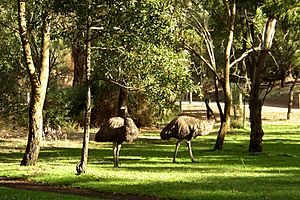 Emus in the picnic area

The Tower Hill Visitor Centre, completed in 1969 and opened in 1970, located in the central complex of volcanic cones, is an important public building designed by Melbourne architect Robin Boyd. Partly constructed from local limestone, he described his structure as "a complete, one-piece, yet seemingly organic growth". Boyd was an avid conservationist and designed the building in harmony with nature, with the circular shape and sloping roof mirroring hilltops on the volcanic island.

The origin of the English name, Tower Hill, is not certain. One source suggests that it arose in the 1840s owing to its resemblance to a castle, while another credits a sailor from Glasgow with "naming the site after Tower Hill in Scotland”.

The reserve is about 275 kilometres (171 mi) west of Melbourne and 15 kilometres (9.3 mi) north-west of Warrnambool. It includes the extinct Tower Hill volcano and wetland and is 614 hectares (1,520 acres) in area. While earlier part of the Shire of Koroit, immediately prior to 1994, it was an unincorporated area managed in conjunction with Lady Julia Percy Island. It then became part of Moyne Shire.

Since 2002, the Worn Gundidj Aboriginal Cooperative, whose staff includes descendants of the original inhabitants, has managed the Visitor Centre in partnership with Parks Victoria, providing information on the geology, flora, fauna and cultural heritage of the area through displays and guided bushwalking tours. In November 2019, it was reported that visitors taking the tours had doubled in the previous three years. There has been discussion about changing the status of Tower HIll from state game reserve to national park status, which would bring additional restrictions, but a change of title is necessary to qualify for extra grants. As of March 2020[update], Parks Victoria is developing a "business case for future government investment for the Tower Hill State Game Reserve (the reserve)".

Despite protests as far back as 1958, shooting continues to be permitted in the reserve during the duck hunting season.

A masterplan published in September 2020 by the Victorian Government and put out to the community for consultation proposes expenditure of more than A$11 million on an upgrade of the infrastructure around the volcano, including the provision of accessible toilets and walking trails linking to Koroit and a nearby rail trail. The plan also includes "low impact accommodation" and a "restaurant with function space and wellness centre".

The wildlife reserve is categorised as an IUCN Category VI protected area.

Panoramic photograph from the Eugene von Guerard lookout at Tower Hill, looking south.
This lookout is located at approximate location from which he painted his Tower Hill, 1855 painting. 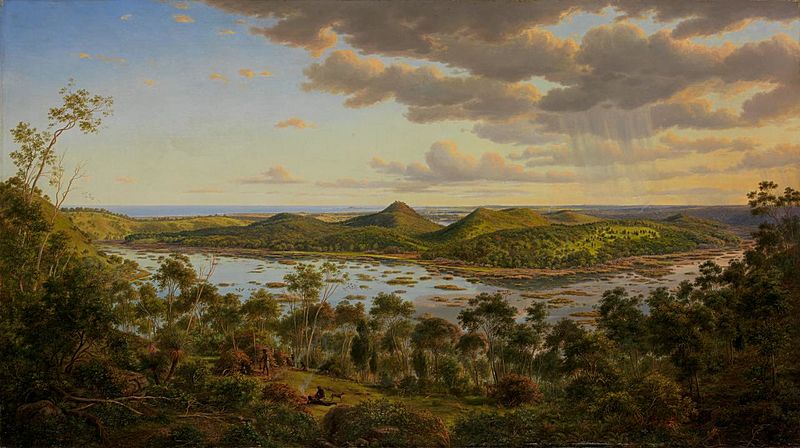 Large panorama of crater, from the south, looking north.
Visible are the scoria cones forming the 'islands' in the middle of the crater, and the lake and far rims of the larger crater.
Note the layering in the far right-hand side of the image.

All content from Kiddle encyclopedia articles (including the article images and facts) can be freely used under Attribution-ShareAlike license, unless stated otherwise. Cite this article:
Tower Hill Wildlife Reserve Facts for Kids. Kiddle Encyclopedia.