Tower of David facts for kids 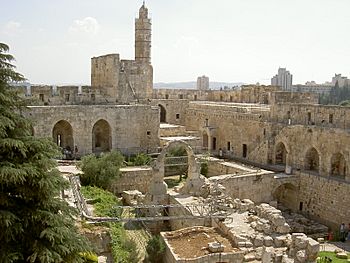 The Tower of David (Hebrew: מגדל דוד, Migdal David, Arabic: برج داود, Burj Daud) is an ancient citadel located near the Jaffa Gate entrance to the Old City of Jerusalem. It dates back to the 2nd century BC. It was destroyed and then rebuilt several times, in the Christian, Muslim, Mamluk and Ottoman periods in Jerusalem. Today the citadel is used for the History of Jerusalem Museum.

In recent years it is also known for its historical sound and light show, the Night Spectacular.

All content from Kiddle encyclopedia articles (including the article images and facts) can be freely used under Attribution-ShareAlike license, unless stated otherwise. Cite this article:
Tower of David Facts for Kids. Kiddle Encyclopedia.