The city has a number of important arterial roads. Pennsylvania Route 5 (12th Street), U.S. Route 20 (26th Street and Buffalo Road), and 38th Street are major east-west routes through Erie's municipal roadway grid. The town is divided east from west at State Street, a major thoroughfare in downtown Erie. U.S. Route 19 is a major southwesterly route from downtown to a shopping area north of Interstate 90 known to locals as Upper Peach Street. 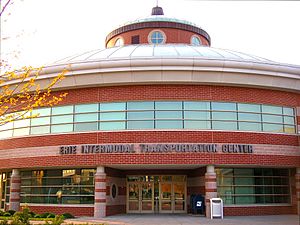 The Intermodal Transportation Center at the end of Holland Street

The Intermodal Transportation Center, which opened in 2002 at the Holland Street Pier, includes a commercial bus terminal. Greyhound Lines and Fullington Trailways provide daily bus service, including routes with local stops between Erie and DuBois and Pittsburgh, with connections to other destinations.

Erie International Airport (IATA: ERI; IACO: KERI), located 5 miles (8 km) southwest of the city, hosts general aviation, charter, and scheduled airline service. Airlines currently serving Erie include United Airlines, US Airways and Northwest Airlines. Tom Ridge Field was recognized by the Pennsylvania Department of Transportation as the fastest-growing airport in the state in 2005. It was also listed as the 3rd fastest-growing airport in the United States by the US Department of Transportation in 2004.

The Port of Erie is located within Presque Isle Bay, a natural harbor off Lake Erie formed by Presque Isle State Park. The Erie–Western Pennsylvania Port Authority is the port authority for the Port of Erie based on the Third Class City Port Authority Act of 1972, P.L. 1392, No. 298. The authority has "the power to plan, acquire, construct, maintain and operate facilities and projects for the improvement, development and operation of the port." It has received millions of dollars in grants for projects related to the port. See list of grants

The Presque Isle Water Taxi is operated by the Port Authority in the summer months between Dobbins Landing and Liberty Park in downtown Erie, and the Waterworks ferry landing on Presque Isle.

A channel on the east side of Presque Isle allows ships to transit between the bay and Lake Erie. Only one cruise service serves the port and does not dock at the Cruise Terminal at the foot of Holland Street; rather at Dobbin's Landing. A Great American Waterways cruise makes a 15-day run from Chicago to Warren, Rhode Island, with a stop in Erie on the eastern leg of the journey. The Great Lakes Cruise Company and the American Canadian Cruise Line both advertise this cruise.

Erie's Metropolitan Planning Organization (MPO) generates an annual Erie Area Transportation Study for the Pennsylvania Department of Transportation (PennDOT). There are fifteen MPO's in the state, each consisting of local elected officials, representatives of major modes of transport, PennDOT officials, and others. Federal and State transportation regulations require urban areas of 50,000 or more in population to have an MPO, which is to do short-term (4 year) and long-term (20+ year) transportation planning.

All content from Kiddle encyclopedia articles (including the article images and facts) can be freely used under Attribution-ShareAlike license, unless stated otherwise. Cite this article:
Transportation in Erie, Pennsylvania Facts for Kids. Kiddle Encyclopedia.