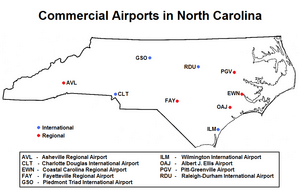 The Charlotte Area Transit System (CATS) operates a historical trolley line and 76 bus and shuttle routes serving Charlotte and its satellite cities. In 2007 it opened the LYNX light rail line connecting Charlotte with suburban Pineville. There are future plans to expand LYNX Light Rail as well as implementation of Commuter Rail and Streetcar.

Raleigh is serviced by the Capital Area Transit (CAT). CAT also operates a historical trolley line giving tours of the historic areas of Downtown Raleigh and other areas of interest in the Capital City. It operates 31 bus routes and a downtown circulator called the R-Line which services the entertainment and shopping areas of Downtown Raleigh. N.C. State University within the City of Raleigh operates its own bus line named the Wolfline to provide service to the university's students and employees.

The Triangle Transit Authority operates buses that serve the Triangle region and connect to municipal bus systems in Raleigh, Durham, and Chapel Hill; recent efforts to build a light rail from downtown Raleigh to downtown Durham have gained traction as both Orange and Durham couunties have instituted a local sales tax and the NCDOT has committed to funding construction of a light rail system.

Piedmont Authority for Regional Transportation (PART) is the Triad's 10-county regional organization with the goal of enhancing all forms of transportation through regional cooperation. PART Express Bus provides express shuttle service to each major Triad city from Piedmont Triad International Airport, while Connections Express connects the Triad to Duke and UNC Medical Centers. PART is also administering and developing several rail service studies that include both commuter and intercity rail.

Wilmington's Wave Transit operates six bus lines within the city as well as five shuttles to nearby areas and a downtown trolley.

Jacksonville recently began a trial bus system called the LOOP, which runs two routes through the city and nearby Camp Lejeune. But this loop has yet to be made permanent.

Asheville operates the Asheville Transit System, which consists of sixteen bus lines providing service throughout the City of Asheville and to Black Mountain, North Carolina.

All content from Kiddle encyclopedia articles (including the article images and facts) can be freely used under Attribution-ShareAlike license, unless stated otherwise. Cite this article:
Transportation in North Carolina Facts for Kids. Kiddle Encyclopedia.