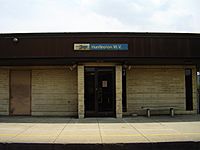 The platform area of the Huntington Amtrak station as seen from the tracks.

While West Virginia was once criss-crossed with commercial and passenger railroad networks, the decline of the coal and timber industries, coupled with the rise of the automobile, led to a sharp drop in track mileage in the state. Many of the former railroad grades are used as trails for hiking and biking throughout the states numerous woodlands.

Today, West Virginia is serviced by two Amtrak lines: one that cuts through the southern portion of the state, including stops in Huntington and Charleston, and one that cuts through the state's Eastern Panhandle, including stops in Martinsburg and Harpers Ferry. The Eastern Panhandle is also serviced during the week by MARC's Brunswick commuter rail line, which terminates in Martinsburg. Commercial railroads still operate in the state, mainly hauling coal to inland ports such as Huntington-Tristate (the nation's largest inland port) and Pittsburgh.

Rivers with commercial barge traffic and docks in West Virginia include: 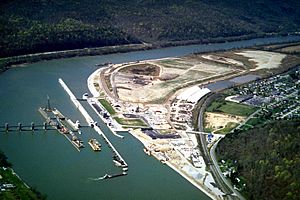 Winfield Lock and Dam on the Kanawha River at Winfield, West Virginia

All content from Kiddle encyclopedia articles (including the article images and facts) can be freely used under Attribution-ShareAlike license, unless stated otherwise. Cite this article:
Transportation in West Virginia Facts for Kids. Kiddle Encyclopedia.