Trenton Falls is a waterfall on West Canada Creek in Trenton, New York. Scenic trails were developed by Brookfield Renewable Power and the Town of Trenton. 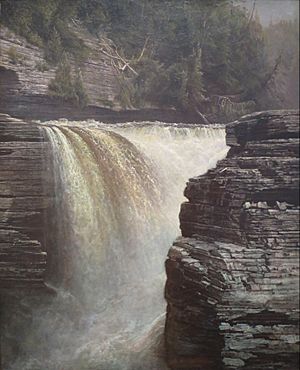 The scenic trails consist of the primary trail (stone dust), which leads tourists to the Trenton Falls Hydro Dam overlook, and the secondary trails (wood mulch), which leads tourists along the gorge. Near the dam, there is a collection of rocks in the water that are accessible to visitors by a winding trail which leads from the adjacent bridge. This specific part of Trenton Falls attracts swimmers, anglers, and photographers.

The limestone in Trenton Falls contains fossils, and some locals sell them to visitors. The fossils include: Concularia (an ancient “armored” jellyfish), echinoderms (spiny-skinned creatures including starfish and crinoids, or sea stars), cephalopods (shelled mollusks with squid-like tentacles), gastropods (snails), and bryozoans (tiny moss animals)." Trenton Falls also has an abundance of limestone deposits. Since the late 19th century, limestone has contributed to the economy of upstate New York.

In 1805, John Sherman was the first known non-indigenous person to see the falls. With funds from Joseph Bonaparte, a pathway to Trenton Falls was created. In 1822, Sherman and his collaborator, Jarvis Phelps, bought 60 acres of land from the Holland Land Company but in 1823 Phelps was bought out by Sherman and the Rural Resort was started. In 1825, the Rural Resort expanded to host overnight guests. While visiting, a tourist named Michael Moore fell into the gorge and acquired a crippling leg injury. Maria, Sherman's daughter, took care of him and In 1831, Moore and Maria were married and acquired the resort. In 1863, the United States Secretary of State, William H. Seward, held a meeting of diplomats at the Trenton Falls Hotel.

"Once a vacation spot for the country's elite, the falls were all but closed to the public for 100 years by the various power companies that used the waterway to generate electricity." Utica Electric Light & Power Company received Moore's Hotel and surrounding land in 1897. Because of the creation of hydroelectric powerhouse and the dam in 1899, the City of Utica, New York was able to receive electricity from Trenton Falls in 1901.

All content from Kiddle encyclopedia articles (including the article images and facts) can be freely used under Attribution-ShareAlike license, unless stated otherwise. Cite this article:
Trenton Falls Facts for Kids. Kiddle Encyclopedia.