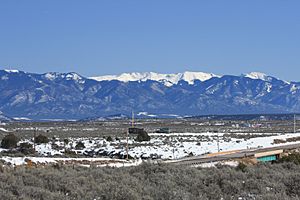 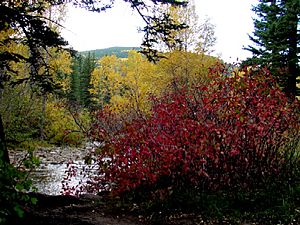 Tres Piedras is located about 30 miles northwest of Taos, New Mexico and west of the Rio Grande on U.S. Route 64. At about 8,000 feet (2,400 m) in altitude, it is located within the southern portion of the San Juan Range of the Rocky Mountains. It is on the western edge of a sagebrush plain, with ponderosa pines growing throughout the village. The village is adjacent to the Carson National Forest.

The village, named for three outcroppings of granite, was settled in 1879 and became a small ranching and timber village.

Between 1880 and 1941 Tres Piedras was a railroad stop on the narrow gauge Chili Line railroad that operated between Antonito, Colorado and Santa Fe, New Mexico. The village still has the old railroad water tower.

It is a granite climbing area, one of two west of the Rio Grande in New Mexico.

All content from Kiddle encyclopedia articles (including the article images and facts) can be freely used under Attribution-ShareAlike license, unless stated otherwise. Cite this article:
Tres Piedras, New Mexico Facts for Kids. Kiddle Encyclopedia.