The Town of Antonito is a Statutory Town located in Conejos County, Colorado, United States. The town population was 781 at the 2010 United States Census.

According to the United States Census Bureau, Antonito has a total area of 0.4 square miles (1.0 km2), all of it land.

Antonito is the southern terminus of the San Luis and Rio Grande Railroad and the eastern terminus of the steam powered, narrow gauge Cumbres & Toltec Scenic Railroad, which runs westwards to Osier, Colorado, and Chama, New Mexico.

There were 357 households of which 33.9% had children under the age of 18 living with them, 37.8% were married couples living together, 20.4% had a female householder with no husband present, and 34.2% were non-families. 31.9% of all households were made up of individuals and 16.5% had someone living alone who was 65 years of age or older. The average household size was 2.45 and the average family size was 3.09. 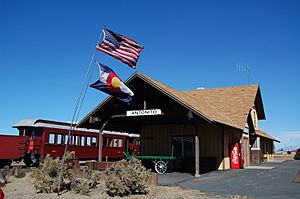 Antonito began life as a sheep herding camp known as San Antonio Junction, referring to its proximity to the Conejos and San Antonio rivers. When the Denver & Rio Grande Railroad built its line south from Alamosa, the town was renamed Antonito and became an important town on the railroad line. The town was incorporated in 1889. There are currently no major industries located in Antonito, but the historic Cumbres & Toltec Scenic Railroad has one terminus in Antonito and the other in Chama, New Mexico.

In 2015, a Colorado State Highway project rebuilt the stretch of Highway 285 that runs through town. The new highway has helped beautify the downtown area and improve traffic flow.

The city boasts a number of unique buildings, including a historic Denver & Rio Grande Western Railroad depot, one of only a few lava rock depots still existing in the United States. Currently in a state of disrepair, a grant to restore the building is in the works. Cano's Castle, a folk-art home constructed by a local resident, attracts attention from tourists and local residents alike. Just south of town, Colorado Parks and Wildlife and Conejos County have jointly developed a high-quality outdoor shooting range with special areas for rifle sighting as well as target practice ranges for various types of rifles and handguns. An indoor archery range and nearby hunting and fishing opportunities attract outdoor enthusiasts.

A library, tire repair shop and a new medical clinic have opened in recent years and Family Dollar recently built a store in Antonito. The South Conejos Jr. and Sr. High School was recently built and boasts facilities on par with the best schools in the area.

The town is known for its many murals, most of them painted by Fred Haberlein.

Antonito is the location of the oldest church building and congregation in Colorado, Our Lady of Guadalupe Catholic Church, built in 1857

All content from Kiddle encyclopedia articles (including the article images and facts) can be freely used under Attribution-ShareAlike license, unless stated otherwise. Cite this article:
Antonito, Colorado Facts for Kids. Kiddle Encyclopedia.