Tumby Bay is a coastal town situated on the Spencer Gulf, on the eastern coast of Eyre Peninsula in South Australia, 45 kilometres (28 mi) north of Port Lincoln. The town of Tumby Bay is the major population centre of the District Council of Tumby Bay, and the centre of an agricultural district farming cereal crops and sheep, as well as having established fishing and tourism industries.

The bay was first explored and given the name Tumby Bay by Matthew Flinders in 1802, after a parish in Lincolnshire, England. In 1840 Governor Gawler renamed the bay Harvey('s) Bay after one other district's early settlers. Then on 15 November 1900 the town of Tumby was proclaimed by Governor Tennyson, and the name of the bay itself reverted to Tumby Bay. On 14 June 1984 the town officially became known as Tumby Bay.

The earliest settlers to the district arrived in the 1840s, and farmed the area with wheat and sheep predominantly. The town soon grew into an important grain storage and loading point, with a jetty constructed in 1874, only the second to be built on the Eyre Peninsula. This provided a much needed outlet for the copper ore which was coming from the Burrowing Mine. The original jetty was taken down in 1999 due to safety concerns, but the other newer jetty is still in use.

The town's first school was opened in 1881 as 'Tumby', and the district's first hospital opened in 1913.

Tumby Bay hosted the popular event Triple J's One Night Stand on 2 April 2011, featuring the bands Birds of Tokyo, Art vs. Science and The Jezabels and locally "Unearthed" musician Joshy Willo. The town's population swelled from 1,000 to over 12,000 for the event.

The historic Tumby Bay Hotel in North Terrace is listed on the South Australian Heritage Register. 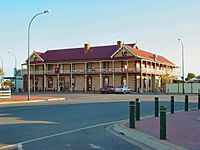 Tumby Bay lies on the large, sheltered bay of the same name on the western side of Spencer Gulf. Much of the land surrounding Tumby Bay is used for agriculture. The coast is predominantly white, sandy beaches, on which the town itself is situated, as well as towering cliffs to the south.

Inside the bay, Tumby Island is the only island but further offshore lie the Sir Joseph Banks Group, a small archipelago that is easily accessed by boat from Tumby Bay.

Like much of coastal South Australia, Tumby Bay experiences a Mediterranean climate with warm to hot summers and moderately wet winters. 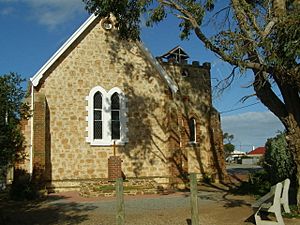 Tumby Bay had a town population of 1228 in the 2001 census, with the vast majority being Australian born. Of those that immigrated (about 100 people), most are from the United Kingdom, with others coming from a variety of European countries, the United States and New Zealand.

The 2001 census by the Australian Bureau of Statistics found that the main religion followed in Tumby Bay was Christianity, with the Anglican, Catholic, and Uniting denominations having the strongest followings. The overall religious affiliations are summed up in the chart, derived from the census data.

The Tumby Bay Area School provides education for students from Reception through to Year 12. A public library is located on the school grounds. A hospital is also in place to serve the health needs of the town.

The region's history is celebrated by a National Trust Museum which is staffed by volunteers.

Tumby Bay is normally reached by private car via the Lincoln Highway that runs along the east coastline of the Eyre Peninsula. Although the town does have an sealed airfield, it is not usually used for private flights, but for the Flying Doctor and crop spraying aircraft.

The town is serviced daily by Premier Stateliner coaches.

Land has been purchased 20 kilometres (12 mi) north east of Tumby Bay for the purposes of developing a bulk commodities export port. The site has been referred to as Sheep Hill, and the project now bears the name of Port Spencer. Centrex Metals Ltd is the project proponent. The site is located immediately north of Lipson Cove. The proposed port (if approved) will be capable of loading Capesize ships (either directly or by transshipment) for export of iron ore and potentially, grain.

A potential rail connection to the Eyre Peninsula Railway at Ungarra, 27 kilometres (17 mi) away, has been discarded in preference for a slurry pipeline for iron ore transport.

All content from Kiddle encyclopedia articles (including the article images and facts) can be freely used under Attribution-ShareAlike license, unless stated otherwise. Cite this article:
Tumby Bay, South Australia Facts for Kids. Kiddle Encyclopedia.