Turtle Creek is a tributary of the West Branch Susquehanna River in Union County, Pennsylvania, in the United States. It is 8.4 miles (13.5 km) long and flows through Limestone Township, Buffalo Township, and East Buffalo Township. The watershed of the creek has an area of 12.7 square miles (33 km2). The creek is designated as an impaired waterbody, with the cause of the impairment being siltation and the source being agriculture. It has a daily sediment load of 6,372 pounds (2,890 kg). The main surficial rock types in the creek's watershed include shale, carbonate, and sandstone. The creek is in the ridge and valley physiographic province.

The main land uses in the watershed of Turtle Creek are forested land and agriculture. However, low-intensity development, wetlands, and grass/turf also occur within the watershed. The area in the creek's vicinity was settled as early as the late 1760s and various mills were built along it in the late 18th century. A number of bridges have been constructed across it. The drainage basin of the creek is designated as a Warmwater Fishery and a Migratory Fishery. Its riparian buffer is absent in some reaches. 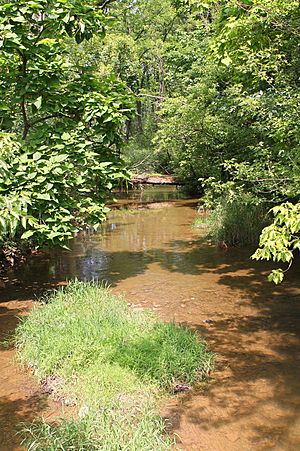 Turtle Creek begins in a shallow valley in Limestone Township. It flows east for several tenths of a mile, almost immediately entering Buffalo Township. The creek then turns north for several tenths of a mile and enters a much broader valley and receiving an unnamed tributary from the left. At this point, it turns east-northeast for several miles, entering East Buffalo Township and receiving three unnamed tributaries from the right. The creek then turns east-southeast and its valley becomes narrower. Over the next few miles, it receives one unnamed tributary from the left and three more from the right. It eventually crosses US Route 15 and turns northeast. A short distance further downstream, it reaches its confluence with the West Branch Susquehanna River.

The watershed of Turtle Creek is in the ridge and valley physiographic province. The creek's valley is in the lowlands of Union County. Erosion occurs along certain streambanks in the creek's watershed.

A total of 55 percent of the surface geology in the watershed of Turtle Creek is shale. A total of 30 percent is carbonate and the remaining 15 percent is sandstone. The most prevalent hydrologic soil groups are C (80 percent) and B (20 percent). The K factor, a measure of the erodability of soil, is 0.249 in the forested land of the creek's watershed, 0.272 in the watershed's wetlands, 0.275 in hay or pastures and land classified by the Pennsylvania Department of Environmental Protection as "low-intensity development", 0.277 in transitional land, 0.28 in grassy areas, and 0.292 in agricultural lands.

Groundwater from a ridge known as Shamokin Mountain contributes to Turtle Creek.

Iron ore was observed on the creek by the 1800s. This ore was pinkish and has been described as "compact, coarse, siliceous". It resembled ores from near Danville. A soil known as the Crestmore silt loam occurs in small areas near the creek.

The watershed of Turtle Creek has an area of 12.7 square miles (33 km2). The mouth of the creek is in the United States Geological Survey quadrangle of Northumberland. However, its source is in the quadrangle of Lewisburg. There are 24.0 miles (38.6 km) of streams in the watershed

The watershed of Turtle Creek is longer along the east-west axis than the north-south axis. It is entirely within Union County, though it occupies a fairly small portion of the county. Adjacent major watersheds include those of Buffalo Creek, Penns Creek, Limestone Run, and the West Branch Susquehanna River.

Samuel Maclay carried out a survey in the vicinity of Turtle Creek in early March 1769. Several more surveys were done near the creek in that year. John Wilson had settled near the mouth of the creek by the fall of that year. In 1770, William Speddy settled approximately 1 mile (1.6 km) of its mouth. Some kind of mill on the creek was owned by a member of the Wilson family as early as 1771. In 1772, John Aurand settled at the mouth of the creek and constructed a gristmill and a sawmill there in the same year. The mill eventually came to be known as Jenkins Mill.

Christopher Weiser's fulling mill was constructed on Turtle Creek in 1792. It later came to be owned by Peter Wolfe. In 1795, Anna M. Smith left 30 pounds in her will to the construction of a school for poor children at the mouth of the creek. In 1842, iron ore was discovered downstream of its mouth. In 1853, several people from Lewisburg purchased 20 acres (8.1 ha) of land to the south of the mouth of Turtle Creek and set up the Union Furnace. Thomas Follmer, Henry Follmer, and William Gundy drowned at the mouth of the creek in 1846.

Turtle Creek was described as a "[stream] of major concern" in the Union County Open Space and Recreation Plan in 1973. In late 20th century, the Union County: A Plan for Development recommended the creation of a greenway along the floodplain of Turtle Creek, running westward from the West Branch Susquehanna River. 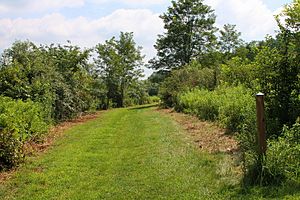 The drainage basin of Turtle Creek is designated as a Warmwater Fishery and a Migratory Fishery. In the 1930s, the creek was noted in the Pennsylvania Angler to be a viable spot for sucker fishing.

The riparian buffers of Turtle Creek are diminished or completely absent in the areas where the creek flows through agricultural land. Cattle are also allowed access to the creek in some places.

A park known as the Turtle Creek Park is located in the vicinity of Turtle Creek. It is a popular destination for local walkers. Numerous successional habitats occur within the park.