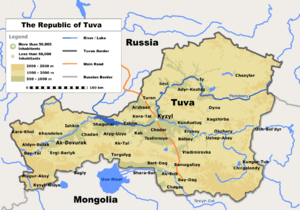 Map of the modern Republic of Tuva. The People's replubvlic had mostly the same borders. 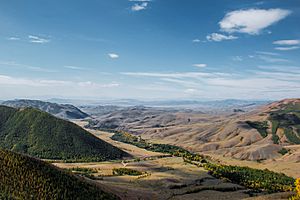 Tuvan People's Republic was a partially recognized state that existed from 1921 to 1944. After 1944 it became part of the Soviet Union. Until 1926, it was also known as People's Republic Tannu-Tuva. Only two states recognized the Tuvan People's republic: the USSR and Mongolia. Even when it existed, it was seen as a puppet state of the USSR. The economy was largely based on nomads raising and selling cattle. The republic was between the Siberian part of Russia, and Mongolia. The capital was the city of Kyzyl. Since 1992, the territory is known as the Tuvan Republic. It is a self-governing part inside the Russian state.

All content from Kiddle encyclopedia articles (including the article images and facts) can be freely used under Attribution-ShareAlike license, unless stated otherwise. Cite this article:
Tuvan People's Republic Facts for Kids. Kiddle Encyclopedia.