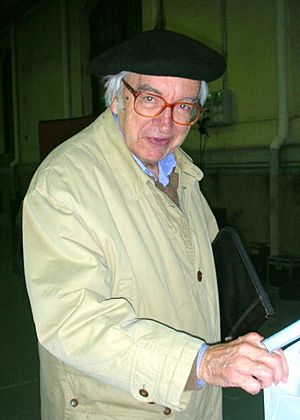 José Luis Álvarez Enparantza (27 September 1929 – 14 January 2012) was a Basque linguist, politician and writer. When writing he used the pseudonym Txillardegi. He was born in Donostia, which is called San Sebastian in Spanish. Even though he did not learn the Basque language until he was 17, he came to be seen as one of the most influential figures in Basque nationalism and culture in the second half of the 20th century.

Together with some friends he started ETA in 1959, and became responsible for their social and cultural activities. He also was a founding member of Herri Batasuna, the Basque nationalist party. As a linguist, he helped shape the structure and orthography of Standard Basque.

All content from Kiddle encyclopedia articles (including the article images and facts) can be freely used under Attribution-ShareAlike license, unless stated otherwise. Cite this article:
Txillardegi Facts for Kids. Kiddle Encyclopedia.