Tyler is a city in Lincoln County, Minnesota, United States. The population was 1,143 at the 2010 census. 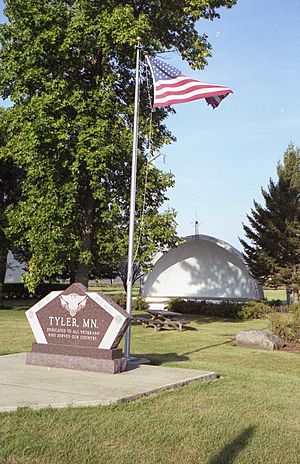 The memorial to all veterans in Tyler

Tyler was platted in 1879. It was named for C. B. Tyler, a Minnesota land agent and newspaper editor. A post office has been in operation in Tyler since 1879.

Tyler's Danebod district was originally built up chiefly by Danish settlers and is now listed on the U.S. National Register of Historic Places.

U.S. Highway 14 serves as a main route in the community.

There were 520 households of which 23.1% had children under the age of 18 living with them, 46.7% were married couples living together, 7.7% had a female householder with no husband present, 1.7% had a male householder with no wife present, and 43.8% were non-families. 40.8% of all households were made up of individuals and 21.4% had someone living alone who was 65 years of age or older. The average household size was 2.10 and the average family size was 2.85.

There were 532 households out of which 24.2% had children under the age of 18 living with them, 56.0% were married couples living together, 6.4% had a female householder with no husband present, and 36.3% were non-families. 33.6% of all households were made up of individuals and 18.4% had someone living alone who was 65 years of age or older. The average household size was 2.20 and the average family size was 2.81.

On August 21, 1918, 36 people died when a large tornado tore through Tyler. It was the 4th most deadly tornado in Minnesota history.

On July 1, 2011, a tornado went through Tyler and no deaths or injuries resulted from the tornado. A few homes were considerably damaged.

Aebleskiver Days is the yearly town celebration, held on the fourth weekend of July. The event is named after æbleskiver, a spherical, delicious, pancake originating from Denmark. On Saturday evening, they have a parade that goes down main street with floats that are made by the various neighborhoods.

The Lincoln County Fairgrounds are located in Tyler where the yearly county fair takes place in August.

Tyler is home of the Danebod Folk School. Danebod hosts many wonderful programs including annual week-long recreational Family Camps and the Folk Meeting which presents a series of world-renowned lecturers. The entire campus at Danebod including Danebod Lutheran Church has been a part of the National Historic Register since 1975 due to both the architectural and historic significance of the structures within the district.

Early settlers of the Danebod colony (located on the south side of Tyler) founded a residential school in the Danish tradition of Folk High Schools and fostered the concept of "learning for living" by which individuals sought to become enlightened and thoughtful citizens. The Folk School building stands as a testament to these values and continues to serve as a place for fellowship and lifelong learning. Each charming dormitory style room is unique in plan and decoration. A large kitchen and dining area provide a perfect setting for group meals and activities. A lecture hall and several classrooms allow ample space for programming.

All content from Kiddle encyclopedia articles (including the article images and facts) can be freely used under Attribution-ShareAlike license, unless stated otherwise. Cite this article:
Tyler, Minnesota Facts for Kids. Kiddle Encyclopedia.