The UAE Healthy Kidney 10K is an annual road running event over 10 kilometers (6.2 miles) that takes place in May in New York City in the United States. The event features both an elite-level men's race and a general mass race for fun runners. Almost 8000 runners take part in the event each year. Its course is situated entirely within Manhattan's Central Park. It is one of two major annual 10K races held at the venue by the New York Road Runners Club, alongside the women-only New York Mini 10K.

The event was launched in May 2005 by New York Road Runners with the sponsorship of the Embassy of the United Arab Emirates. Zayed bin Sultan Al Nahyan, a former president of the country, received treatment and a kidney transplant at the Cleveland Clinic in 2000. He lived until November 2004 and the event was created in his honour soon after, with proceeds from the race going towards the National Kidney Foundation.

The course for the race is a single-looped circuit on the paths and roads within the park, comprising a little over one full lap of the park in a clockwise direction. Runners start in the south-west corner of Central Park, heading north past Sheep Meadow and The Ramble and Lake via West Park Drive. It loops southwards past Harlem Meer at the 5 km (3-mile) mark and goes south on East Park Drive, passing the Reservoir and Great Lawn and Turtle Pond. The course reaches the 5-mile mark just before Central Park's Bandshell. Runners turn back north after Wollman Rink, reach the 6-mile mark at the start line, then cross the finish line near the Tavern on the Green.

The first two editions of the men's race were won by Craig Mottram. Dathan Ritzenhein became the first American to win the race and Patrick Makau became the first African the year after. Ethiopians Tadese Tola and Gebre Gebremariam ran course records under 28 minutes to win in 2009 and 2010. Phoenix Kipruto of Kenia set the course record at 27:08 minutes in 2018, the fastest record eligible 10k ever run on US soil. The event does not actively invite an elite women's field, due to the proximity of June's New York Mini 10K women's race, but elite level female athletes who are resident in the area typically take part. Ethiopia's Senbere Teferi holds the women's course record of 30:59 minutes, set in 2019.

The 2020 edition of the race was cancelled due to the COVID-19 pandemic. 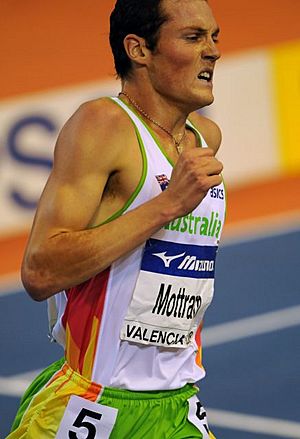 All content from Kiddle encyclopedia articles (including the article images and facts) can be freely used under Attribution-ShareAlike license, unless stated otherwise. Cite this article:
UAE Healthy Kidney 10K Facts for Kids. Kiddle Encyclopedia.