Star Trek: The Next Generation facts for kids 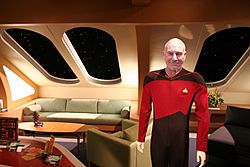 Captain Jean-Luc Picard in his quarters on the USS Enterprise-D.

Star Trek: The Next Generation was the second television series of the science fiction franchise Star Trek. It was created by Gene Roddenberry, and was aired for seven years, from 1987 to 1994.

The Next Generation was set in the 24th century, eighty years after the original series of Star Trek, and it focused on the lives of a crew on a starship called Enterprise. The crew's mission was to explore the universe, as was the mission of the crew in the original series.

The Starfleet officers and members in Star Trek: The Next Generation and most 24th century Star Trek based shows had to wear a jumpsuit, (except for children and some parents on board the Enterprise) with a communicator badge (also known as a combadge) shaped in the form of an oval, with the Starfleet logo over top of it on the upper right side. The uniform colors would also represent your position.

With ranks higher than Captain, including the rank of Admiral (1 to 5 star) the pips would be on both collars.

During other episodes including (TNG: Future Imperfect) the TNG crew had a different way to show rank. The ranks were shown on a different communicator badge with the Starfleet logo and four long bars behind the logo, closely separated vertically. Each bar that was lit would represent a rank. The rank of admiral was shown with the bars on the combadge being full white. There was also another communicator (TNG: All Good Things Part I & II) with an outline of a Starfleet logo and two long vertical trapezoids, each separated horizontally.

The U.S.S Enterprise (NCC-1701-D) is a Galaxy Class starship from the television series, Star Trek: The Next Generation. The Enterprise was set in the 24th century, with the same mission as the original U.S.S Enterprise (NCC-1701). She weighed in at 4,960,000 tons and was powered by a warp core with a top speed of Warp 9.925.During the time of its service, the Enterprise-D was the flagship of the Federation Starfleet. A Galaxy-class starship, it was a large, long-range exploratory ship with 42 decks and a usual complement of 1,014 crew and civilians (e.g., their family members) but it was capable of carrying over 6,000 personnel. The Enterprise had 12 Type X phasers and three Photon Torpedo launchers. The ship has a high-capacity shield grid. It could carry 250 photon torpedoes. The ship had 1 shuttle, and 8 transporter rooms. The Enterprise can separate into 2 separate into two sections, saucer and star drive(hull).

All content from Kiddle encyclopedia articles (including the article images and facts) can be freely used under Attribution-ShareAlike license, unless stated otherwise. Cite this article:
Star Trek: The Next Generation Facts for Kids. Kiddle Encyclopedia.