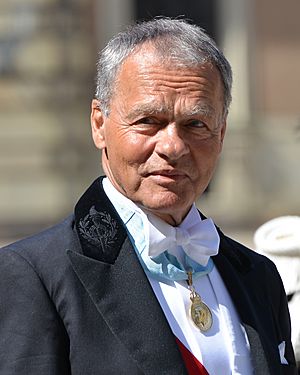 Ulf Adolf Roger Dinkelspiel (4 July 1939 – 9 January 2017) was a Swedish politician and financier. He was a member of the Moderate Party. He served as the Minister of European Affairs and Foreign Trade from 1991 to 1994. He was born in Stockholm.

Dinkelspiel died from cancer on 9 January 2017 in Stockholm. He was 77.

All content from Kiddle encyclopedia articles (including the article images and facts) can be freely used under Attribution-ShareAlike license, unless stated otherwise. Cite this article:
Ulf Dinkelspiel Facts for Kids. Kiddle Encyclopedia.