Union Square is a neighborhood in the southeastern part of Somerville, Massachusetts. It is centered on Union Square proper, which is located at the intersection of Washington Street, Webster Avenue, and Somerville Avenue.

The name "Union Square" comes from the square having been used as a recruitment and mustering site for the Union Army in the American Civil War. A plaque commemorating the mustering site sits at the southwest corner of the square between Somerville Avenue and Washington Street, and the Prospect Hill Monument is located several blocks away atop Prospect Hill. Union Square is now the commercial center of a primarily residential neighborhood with many restaurants, bars and neighborhood stores.

As the oldest and largest commercial area in the city, Union Square is home to a number of community institutions, including the Somerville Police headquarters, Somerville Community Access Television (SCATV), and Boston Free Radio.

Union Square was Somerville’s earliest commercial district to develop when it was still a part of Charlestown. Early trade routes passed through the Square and a tavern was built there as early as 1770. Originally called "Sand Pit Square," the area's sandy, clay pit-dotted pastures yielded a fine grade of silica used in glass and brick-making. 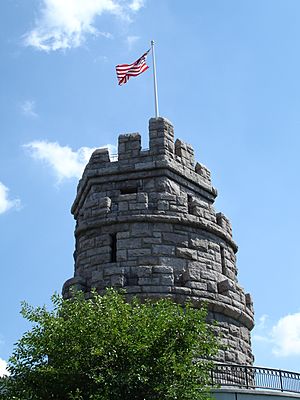 It was during the American Revolution that Union Square took center stage. Because of its location and height providing panoramic views and control of Charlestown, Somerville, and Cambridge, Prospect Hill had great strategic importance in the Revolutionary War and became known as the "Citadel". The castle, dedicated in 1903, is a monument commemorating the fortifications atop the hill during that war. A tablet inside reads: "This tablet is erected in memory of the soldiers of the Revolution and of the Civil War who encamped on Prospect Hill and of the banners under which they valiantly fought."

Somerville is one of several locales claiming to have hosted the first raising of the U.S. Flag, called the Grand Union Flag. Tradition claims that George Washington raised the flag on Prospect Hill on January 1, 1776, and a plaque on the hill indicates such. However, some scholars dispute these traditional accounts, concluding that the flag raised at Prospect Hill was probably a British Union Flag. Since a favorable surrender was then being offered to the rebelling colonists, the raising of a flag similar (or identical) to the Union Jack was briefly mistaken for a gesture of surrender. 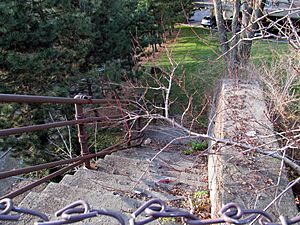 In its early years, Somerville was an agricultural suburb, supplying the growing urban area surrounding Boston. For a time the Union Square area was known as Milk Row after the small farms surrounding it.

Union Square became a major commercial center during the early 19th century due to its location at an important crossroads. When the Warren Bridge opened to link Charlestown and Boston in 1828, it caused a considerable increase in traffic along Washington Street and Charlestown Lane (now Somerville Avenue). Railroad access began with the opening of the Fitchburg Railroad in 1843 and then opening of the Union Square railroad station just west of Webster Street. The Boynton Yards area south of the rail line and east of Union Square was created in 1874 when the swampy ground was filled with material from the top of Prospect Hill. It became a meat packing and manufacturing district, with a slaughterhouse, brickyard, glass shop, and later other industries.

After 1853, the square was known as Liberty Pole Square, in honor of the liberty pole erected there by anti-slavery firemen. In 1861 it was again renamed as Union Square as a pro-reunification gesture for the American Civil War and after the square's Revolutionary War history.

Service to the Union Square railroad station ended in 1938, as some local stops on the Fitchburg Railroad were dropped due to competition from streetcars. By then, Union Square was well served, first by Boston Elevated Railway streetcars, then by buses. 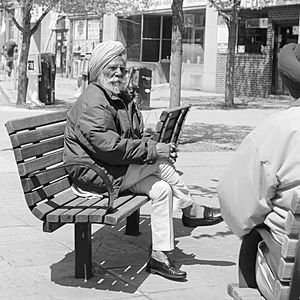 Members of the Sikh community gathering in Union Square

Like much of Somerville, Union Square suffered economic decline in the 20th century as wealthy residents moved to more distant suburbs and manufacturing moved away from the area. The city began planning for a revitalization of Boynton Yards in the 1980s, including the construction of South Street to allow trucks to serve lots once only reachable by rail. The area proceeded to attract new manufacturing, including Taza Chocolate, several breweries, and other food companies.

With rents lower than nearby Cambridge, Union Square attracted new immigrant populations towards the end of the 20th century, including large groups of Brazilian, Punjabi, and Sikh residents. Many markets in the area are run by and cater to the various ethnic groups that live in and around Union Square.

Union Square's location at the juncture of working-class East Somerville and the city's tonier western sections have made it the focal point of changing demographics. More upscale cafes, bars, and restaurants have opened since the 1990s, bringing gentrification deeper into Somerville. Union Square Main Streets, a local development group, began running a Saturday morning farmers' market in 2005 as one of its first visible efforts in the square. A landscaped community garden with regularly scheduled concerts and artistic events sits just outside Union Square at the site of an old school. 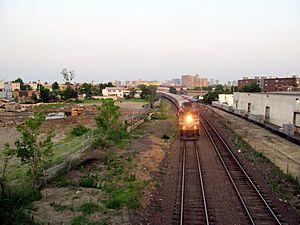 Site of the future Green Line station in July 2015

Union Square is a minor hub for MBTA bus service, with 5 routes passing through:

All content from Kiddle encyclopedia articles (including the article images and facts) can be freely used under Attribution-ShareAlike license, unless stated otherwise. Cite this article:
Union Square (Somerville) Facts for Kids. Kiddle Encyclopedia.