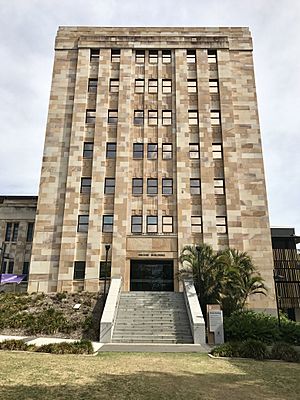 The UQ Anthropology Museum is located in the Michie Building (09), St Lucia Campus. The Museum annex can be seen on the right.

The University of Queensland Anthropology Museum is in Brisbane, Australia. It houses the largest university collection of ethnographic material culture in Australia.

The Museum was formed in 1948 by Dr Lindsey Winterbotham's donation of over 1,000 objects. The initial focus of the Museum was on the material culture of Aboriginal Australia, but swiftly broadened to incorporate a diverse range of material from Papua New Guinea, Solomon Islands and the broader Pacific region. Early donors to the museum included missionaries, researchers and anthropologists such as Ursula McConnel and AP Lyons.

The Museum houses over 19,000 artefacts and over 6,500 photographs. The collection includes field collections and private donations and as a whole describes mid-late 20th century intercultural engagements in Queensland and the Pacific region.

The Museum holds a broad range of stone artefacts from across Australia.

The collection includes smaller collections from southern Africa and Southeast Asia, as well as a collection of colonial surveying equipment from William Landsborough and Augustus Gregory.

The museum has published several series of academic monographs, namely the "Cultural and Historical Records of Queensland" and the "Occasional Papers in Anthropology,' which changed its name to: "TEMPUS: Archaeology and Material Culture Studies in Anthropology". Publication started in 1973 and will be listed below.

Cultural and Historical Records of Queensland

The series' name changed to TEMPUS.

One of the earliest collections of Aurukun ceremonial sculpture

The Museum is on level 1 of the Michie Building and is open 11am to 3pm daily. Admission is free

All content from Kiddle encyclopedia articles (including the article images and facts) can be freely used under Attribution-ShareAlike license, unless stated otherwise. Cite this article:
University of Queensland Anthropology Museum Facts for Kids. Kiddle Encyclopedia.