Aurukun is a town and locality in the Shire of Aurukun in Far North Queensland, Australia. It is situated approximately 100 kilometres (62 mi) south of Weipa. The town faces west to the Gulf of Carpentaria, and during the wet season, roads are impassable. It is an Indigenous community.

In March 2008, the Sydney Morning Herald reported that standards of justice, education and child safety had collapsed in Aurukun, and that the local community justice group had called for children to be removed from the town for their own safety and wellbeing.

The area is rich in bauxite.

At the 2011 census, Aurukun had a population of 1,295, including 1,193 Indigenous people, up from a total population of 1,043 in 2006. The traditional language is predominantly Wik Mungkan with a mixture of other dialects. English is taught in the school. Aurukun has a plethora of clan and tribal names. There are some 50 to 60 families from five major clan groups, which are split into two factions — the "top end" and "bottom end". Violent conflict between the two groups creates problems in the community on a regular basis.

The first recorded contact between Europeans and Aboriginals was near Aurukun on the Janszoon voyage of 1605–06. 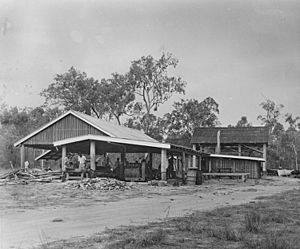 The Aurukun Mission (known then as the Archer River Mission Station) was established on 4 August 1904 for the Presbyterian Church of Australia by the Reverend Arthur and Mrs Mary Richter, two Moravian missionaries and managed under the provisions of the Queensland Aborigines Act. (Several of the current residents were taught by these missionaries and remember them well.) Aboriginal people were relocated from a large surrounding area, many against their will, to the mission settlement. Aurukun was "ruled" for 40 years by Reverend William Mackenzie - as the missions Chief Protector for the Aboriginal Protection Board. The town also had a sawmill, butcher and bakery. Today there is only a general store.

Aurukun Post Office opened on 1 July 1972. In 1978, the Queensland government decided to take over control of both the Aurukun and Mornington Island Reserves. Both communities were against this and protested seeking the help of the Federal government.

After lengthy negotiations, legislation for self-management of the two reserves was introduced into federal parliament and the Aboriginal and Torres Strait Islanders (Queensland Reserves and Communities Self Management) Act was passed on 7 April 1978.

Further negotiations took place between State and Federal Ministers and on 22 May 1978, the Local Government (Aboriginal Lands) Act came into force giving a 50-year lease to the Shire of Aurukun to be trustee for the land within the boundaries. Aurukun and Mornington Shire remain the only Aboriginal communities in Queensland constituted as local authorities.

With the coming of the missionaries, children were confined to dormitories to isolate them from the influence of their people. However, many people remained outside the mission up until the 1950s, ensuring the culture remained strong.

In 1975, the community was placed under direct State government control. In 1978, the Aurukun people were given a 50-year lease on their land under the administration of the shire clerk and an elected Aboriginal Council.

Following the Wik case the land has reverted to Native Title held by the Wik people. The focal area of the Wik lies between the Archer and Edward Rivers of Western Cape York Peninsula and inland to Coen. Most Wik people still live in this triangle.

The Wik and Kugu Art Centre in Aukurun opened in 1987, making it the oldest established art centre on Cape York Peninsula. The Centre has about 30 members, and artists from the Centre participate in competitions and exhibitions worldwide. Aurukun artists are famous for their sculptures, which traditionally were carved from soft woods for use in ceremony.

Aurukun is home to a community swimming pool, and a new large basketball hall / recreational centre. There are outdoor basketball courts and a rugby field. Aurukun participates in football carnivals and softball with other communities in the Cape region every couple of months.

Bushwalking, fishing and some camping are the dominant pursuits for tourists visiting. Visitors are required to apply for a permit from the Aurukun Shire Council prior to entering the community.

All content from Kiddle encyclopedia articles (including the article images and facts) can be freely used under Attribution-ShareAlike license, unless stated otherwise. Cite this article:
Aurukun, Queensland Facts for Kids. Kiddle Encyclopedia.