Weipa is the largest town on the Gulf of Carpentaria coast of the Cape York Peninsula in Queensland, Australia. At the 2011 census, Weipa had a population of 3,334; the largest community on Cape York Peninsula. It exists because of the enormous bauxite deposits along the coast. The Port of Weipa is mainly involved in exports of bauxite. Over the last decade or so there have been occasional shipments of live cattle from the port.

Weipa is just south of Duyfken Point, a location now agreed to be the first recorded point of European contact with the Australian continent. Dutch explorer Willem Janszoon, on his ship the Duyfken, sighted the coast here in 1606. This was 164 years before Lieutenant James Cook sailed up the east coast of Australia. 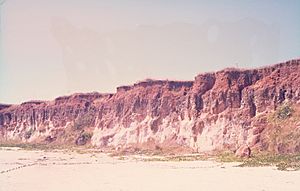 Weipa began as a Presbyterian Aboriginal mission outpost in 1898.

Very restrictive legislation was enacted by the state of Queensland in 1911, making the Protector the legal guardian of every Aboriginal and half-caste child (until he/she was 21), and the right to confine (or expel) any such person within any reserve or Aboriginal institution, and the right to imprison any Aboriginal Australian or half-caste for 14 days if, in the Protector's judgement, they were guilty of neglect of duty, gross insubordination or wilful preaching of disobedience. It also gave powers to the police to confine Aboriginal Australians to reserves to "protect them from corruption". This latter power was given by Comalco in 1957 to justify the removal of Weipa Aboriginal Australians.

In 1932 the community had to relocate to its present site, at Jessica Point now called Napranum, because of malaria. It is about 12 kilometres (7.5 mi) south of the present town of Weipa. At this time most of the people were Awngthim but soon different tribes and clans were brought from Old Mapoon (when the people were forcibly removed and the settlement burnt down on 15 November 1963), and other communities.

In 1955 a geologist, Henry Evans (1912–1990), discovered that the red cliffs on the Aboriginal reserve, previously remarked on by the early Dutch explorers and Matthew Flinders, were actually enormous deposits of bauxite – the ore from which aluminium is made – and to a lesser extent tungsten.

The "Comalco Act of 1957" revoked the reserve status, giving the company 5,760 square km (2,270 sq mi) of Aboriginal reserve land on the west coast of the Peninsula and 5,135 square km (1,933 sq mi) on the east coast of Aboriginal-owned (though not reserve) land. Mining commenced in 1960. The mission became a government settlement in 1966 with continued attempts by Comalco to relocate the whole community elsewhere. The company then built a new town for its workers on the other side of the bay.

Weipa has a tropical savanna climate, with hot temperatures above 30 °C throughout the year. Three distinct seasons exist, the wet season, which runs from January to April, is characterized by heavy downpours on an almost daily basis. Monsoon lows and tropical cyclones cause even more extreme rainfall, up to 200 mm (8 in) in 24 hours. The dry season, running from May to September features hot and dry days, however nighttime lows are cooler and rainfall is almost non-existent. The build-up season, runs from October to December and is oppressively hot and humid, with frequent days over 35 °C. Dewpoints in the wet season average at 24 °C and 18 °C in the dry season.

Rainfall during the build-up is infrequent, but when it does occur, usually falls in brief, heavy downpours associated with severe thunderstorms. These seasons are not always set however, sometimes the wet season can start as early as November or the dry season can extend as late as December and monsoonal downpours have occurred as late as May. Extreme temperatures have ranged from 9.6 °C (49.3 °F) to 38.4 °C (101.1 °F). The highest daily rainfall recorded was 327.8 mm (12.9 in) during the passage of Tropical Cyclone Oswald in January 2013. 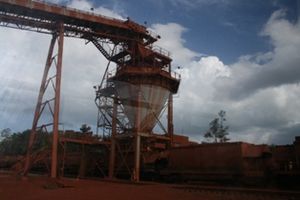 One of the world's largest Bauxite mines in Weipa, Australia

The present town was constructed mainly by Comalco (now called Rio Tinto Alcan), a large aluminium company, which began making trial shipments of bauxite to Japan in 1962. A railway was constructed to transport the ore from the mine at Andoom to the dump of the export facility at Lorim Point. The bauxite mine is the world's largest with planned expansions increasing the margin over other mines in 2010.

Weipa has a public library, visitor's centre, swimming pool, bowling green, golf club, tennis and squash courts. There are netball and basketball courts as well as football fields. At Nanum the shopping precinct has a Woolworths supermarket, bakery, coffee shop, travel agent, clothing shop, post office, newsagency / sports shop and butchers. There is also a chemist, camping and fishing store and within walking distance is a gift shop, furniture and whitegoods store, credit union and Centrelink office. At Evans Landing there are a hardware store and a number of mechanical workshops.

All content from Kiddle encyclopedia articles (including the article images and facts) can be freely used under Attribution-ShareAlike license, unless stated otherwise. Cite this article:
Weipa, Queensland Facts for Kids. Kiddle Encyclopedia.