The Uptown Theater, known as The Uptown (formerly Cineplex Odeon Uptown or AMC Loews Uptown 1), was a single-screen movie theater in the Cleveland Park neighborhood of Washington, D.C. Opened in 1936, it hosted the world premieres of such movies as 2001: A Space Odyssey and Jurassic Park. It closed in March 2020.

Its screen was the largest commercial movie theater screen in the DC Metro area outside of the Smithsonian Institution.

Opened on October 29, 1936, the theater was designed by architect John Jacob Zink, whose firm designed over 200 theaters across the United States, and the 14th built by Warner Brothers in Washington, D.C. The exterior is constructed of yellow and red brick and the facade is partially faced in limestone fluted panels. The limestone features typical Art Deco motifs, including zigzag patterns and floral reliefs. The marquee includes streamlined aluminum bands. The main entrance to the theater is below this marquee. Two one-story storefronts flank the theater entrances.

In December 2010, the theater's Norelco 35mm/70mm projector was dismantled and replaced with a Christie Dual-Projector 3D system for the opening of Tron: Legacy.

In March 2020, AMC Theatres announced the closing of the 84-year-old theater, as AMC's lease on the space was about to expire. Unlike many temporary closures hitting the D.C. region in 2020, the closure of the Uptown Theater is permanent and does not seem connected to the COVID-19 pandemic. 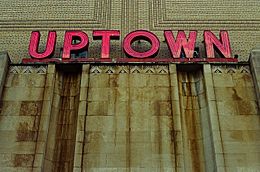 All content from Kiddle encyclopedia articles (including the article images and facts) can be freely used under Attribution-ShareAlike license, unless stated otherwise. Cite this article:
Uptown Theater (Washington, D.C.) Facts for Kids. Kiddle Encyclopedia.