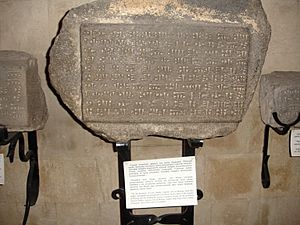 Urartian cuneiform tablet on display at the Erebuni Museum in Yerevan.

Urartian is the name for the language spoken by the people of the ancient kingdom of Urartu in northeast Anatolia (present-day Turkey), in the region of Lake Van.

Urartian was a language isolate, which was neither Semitic nor Indo-European, but a member of the Hurro-Urartian family.

There is a hypothesis that suggests that besides the cuneiform inscriptions of the Urartian language, Urartu had a native hieroglyphic writing system. Armenian scientist Artak Movsisyan published a partial attempt deciphering of Urartian hieroglyphs, saying that they were written in an early form of Armenian.

All content from Kiddle encyclopedia articles (including the article images and facts) can be freely used under Attribution-ShareAlike license, unless stated otherwise. Cite this article:
Urartian language Facts for Kids. Kiddle Encyclopedia.