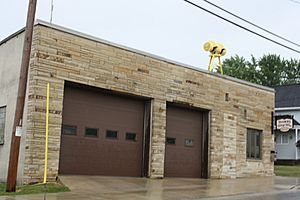 Valders is a village in Manitowoc County, Wisconsin, United States. The population was 962 at the 2010 census.

The village is known within the state for its dolomitic limestone quarry, which produces rock. harbor rock, gravel, and a very hard and weather resistant type of marble. The dolomitic limestone is Silurian aged Niagaran Dolomite. Glacial sediments overlying the bedrock in the area consist of a pebbly and cobbly, sandy, silty glacial till known as the Valders Member of the Kewaunee Formation. The Valders Member was named after the village and the type section was described along the eastern side of the present day quarry.

Valders was settled in the 1850s by immigrants from the Valdres mountainous region of Norway. The largest town in Valdres is Fagernes, but many immigrants arriving in Wisconsin came from the valleys of Vestre Slidre and Øystre Slidre, when hunger (sult) in these rocky hillside farms was far from unheard of. Valders did not really develop as a village until the arrival of the railroad in 1896, the traditional year of its founding. It was incorporated as a village under Wisconsin law in 1921, with William F. Christel as the first village president. As the village was founded by Norwegians, it was natural that the first churches were Lutheran: Valders Lutheran parish, Our Savior Lutheran parish, and Gjerpin Lutheran parish. These were later combined into Faith Lutheran parish (ELCA). There is also a small Protestant Conference parish. After the arrival of the railroad, many German settlers moved in who were primarily Catholic, but no parish was developed for them. To this day, there is still a significant population of Catholics, including most of the area farmers, who worship at St. Gregory in St. Nazianz to the south, St. Mary of the Immaculate Conception in Clarks Mills to the north (presently joined to St. Michael in Whitelaw), or St. Thomas the Apostle in Newton to the east.

According to the United States Census Bureau, the village has a total area of 1.47 square miles (3.81 km2), all of it land.

There were 406 households, of which 33.5% had children under the age of 18 living with them, 51.2% were married couples living together, 11.8% had a female householder with no husband present, 3.9% had a male householder with no wife present, and 33.0% were non-families. 29.3% of all households were made up of individuals, and 12% had someone living alone who was 65 years of age or older. The average household size was 2.37 and the average family size was 2.90.

All content from Kiddle encyclopedia articles (including the article images and facts) can be freely used under Attribution-ShareAlike license, unless stated otherwise. Cite this article:
Valders, Wisconsin Facts for Kids. Kiddle Encyclopedia.