Vayas is one of the 31 barrios of the municipality of Ponce, Puerto Rico. Along with Playa, Bucana, Canas and Capitanejo, Vayas is also one of Ponce's five coastal barrios. Together with Capitanejo, Vayas is also one of two rural coastal barrios in the municipality. It was organized in 1831, at which time it was divided into Vayas Norte and Vayas Sur; in 1878 the two were subsequently merged into today's Vayas.

Vayas is a rural, coastal barrio located in the southern region of the municipality, east of the city of Ponce, and southeast of the traditional center of the city, Plaza Las Delicias. It is located at 18.0107°N 66.5567°W, with an elevation of 43 feet. The toponomy, or origin of the name, is related to the edges or boundary of an area or barrio.

It is bounded on the North by PR-1 and La Esperanza Street, on the South by the Caribbean Sea, on the West by Bucara Street/Los Caobos Avenue, PR-52 (roughly), and the Costa Caribe Country Club East Access Road, and on the East by Río Inabón.

In terms of barrio-to-barrio boundaries, Vayas is bounded in the North by Sabanetas and Coto Laurel, in the South by the Caribbean Sea, in the West by Bucaná, and in the East by Capitanejo.Autonomous Municipality of Ponce. Office of Territorial Planning. (Municipio Autonomo de Ponce. Oficina de Ordenacion Territorial.) 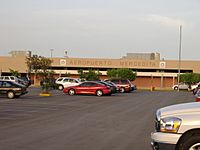 Unlike most other barrios of Ponce, Vayas' landscape is entirely flat. Vayas has the third longest coastline of all five of Ponce's coastal barrios, after Canas and Playa. Vayas has 7.1 square miles (18 km2) of land area and 3.4 square miles (8.8 km2) of water area.

The main roads serving barrio Vayas are PR-52 and PR-1.

All content from Kiddle encyclopedia articles (including the article images and facts) can be freely used under Attribution-ShareAlike license, unless stated otherwise. Cite this article:
Vayas Facts for Kids. Kiddle Encyclopedia.