The specific name fuscescens is New Latin for "blackish", from Latin fuscus, "dark". The English name may imitate the call. 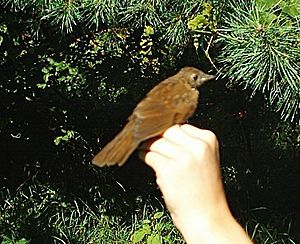 This bird has a breezy, downward-spiraling, flute-like song, often given from a low and concealed perch. The most common call is a harsh, descending vee-er, which gave the bird its name. Other calls include a chuckle, a sharp and low "wuck", and a slow wee-u. Veeries have been shown to decrease the rate and duration of singing when exposed to Barred owl playback, possibly to decrease the chance of predation.

The breeding habitat is humid deciduous forest across southern Canada and the northern United States. Breeding habitat includes dense growth and dense understory close to a water source, such as a stream. These birds migrate to eastern South America. It has been found that winter range may include the entire Amazon basin, Mérida state Venezuela, the headwaters of the Orinoco River, and São Paulo state, Brazil. Stopover regions during migration of several Veeries from Delaware include the coast of the Gulf of Mexico, the coasts of the Carolinas, Cuba, Jamaica, Colombia, and Venezuela. They are very rare vagrants to western Europe.

They forage on the forest floor, flipping leaves to uncover insects; they may fly up to catch insects in flight. They mainly eat insects and berries. Insects are a main food source during the breeding season, while fruit and berries may compose most of the diet during the late summer and fall.

They make a cup nest on the ground or near the base of a shrub. The nest consists of three structural layers, including outer, inner, and nest lining layers. The outer layer consists of leaves and supporting branches, while the inner layer consists of material woven together. Nest lining consists of flexible material such as bark, roots, and seeds. The use of different parts of 27 plant species, including invasive/alien plants, has been documented. Nests contain three to five greenish-blue eggs that may or may not have brown spots. The eggs are incubated for 10 to 14 days by the female, while both parents feed nestlings. Young Veeries can leave the nest between 10 and 12 days after they hatch.

This bird has been displaced in some parts of its range by the related wood thrush (Hylocichla mustelina). However, a case of interspecific parental care of a Veery nest by a Wood Thrush has been documented in which a Wood Thrush provided more parental care to the Veery nestlings than did the parents. Veeries are occasional hosts for the eggs of brown-headed cowbirds (Molothrus ater). Veery males have been found to engage in behaviors similar to the polygynandrous Bicknell’s Thrush in that males may feed nestlings at more than one nest and there may be multiple male feeders at nests.

Threats to the Veery include nest parasitism by Brown-headed Cowbirds, climate change, and alteration of Amazonian lowland forests. It is suggested that Veeries are in decline, and Breeding Bird Survey trend results indicate that Veery populations declined across most of its range from 1966 to 2013. There have been concerns that the use of invasive/alien plant parts may decrease nesting success, but negative impacts have not been documented. Other potential threats include the loss of woodland habitat, squirrels, chipmunks, and raptors.

All content from Kiddle encyclopedia articles (including the article images and facts) can be freely used under Attribution-ShareAlike license, unless stated otherwise. Cite this article:
Veery Facts for Kids. Kiddle Encyclopedia.