The Ventura Pier, formerly known as the Ventura Wharf and the San Buenaventura Wharf, is a wooden pier located on the Pacific Ocean in Ventura, California. The pier has been designated as Ventura Historic Landmark No. 20. It is the oldest pier in California.

The pier was first built in 1872 and served for many years as a transportation hub and commercial wharf used to bring merchandise and lumber to the area and to export the area's agricultural products and crude oil. It has been partially destroyed by storms and waves on several occasions and by collision with the steamer Coos Bay in 1914. The pier's most recent reconstruction and renovation project was completed in 2000. From 1938 to 1995, it was the largest wooden pier on the California coast at a length of 1,958 feet (597 meters).

In its current configuration, the pier is 1,600 feet (490 meters) long. It is no longer used as a commercial wharf and is instead used for fishing and as a pedestrian walkway with views of Ventura and the Channel Islands.

Pier Into The Future is a non-profit organization formed in 1993 to assist in preserving and maintaining the pier. The organization has established an endowment to support the pier and raises funds by selling naming opportunities and with two annual fundraising events: Pier Under the Stars and a sunset dinner in the spring.

Construction and purpose of the wharf 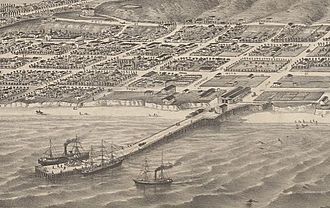 On May 20, 1871, two meetings of San Buenaventura citizens were held at Spear's Hall, one in the morning and a follow up in the evening, to discuss the construction of a wharf in Ventura. Articles of incorporation and bylaws were adopted for the formation of a company to undertake the project. Joseph Wolfson and his father-in-law Juan Camarillo were principal forces behind the wharf.

On May 18, 1872, the first piling was driven into the ground for the wharf. A ceremony was held at which Arcadia Camarillo, the wife of Joseph Wolfson who led the effort to build the wharf, broke a bottle of wine over the first piling. The wharf was completed nearly five months later on October 5, 1872. The Ventura Signal wrote: "At last a steamer can lay alongside of the wharf, and discharge and take on cargo and passengers. It is a grand improvement upon the old way, and duly appreciated by shippers and travelers." Robert Sudden was hired as the manager of the wharf, a position he held for more than two decades.

The wharf was built to promote the city's growth. Prior to construction of the wharf and continuing until the arrival of the railroad in 1887, ground transportation to Ventura was difficult, particularly in the rainy season when the flow of the Ventura and Santa Clara Rivers isolated the city. Accordingly, ships docking at the wharf also served as a principal means of transportation to and from Ventura.

In its early decades of operation, the pier was known as the Ventura Wharf and was used as a commercial wharf. The products shipped from the Ventura Wharf included agricultural products and eventually crude oil from the local oil fields. In its annual statement for the year ending April 30, 1898, the Ventura Wharf Company reported exports that included 518,204 barrels (82,387,900 l) of bulk oil, 80,384 bags of beans (all varieties), 28,819 bags of corn, 14,721 bags of barley, 11,855 boxes of oranges, and 6,285 boxes of lemons. 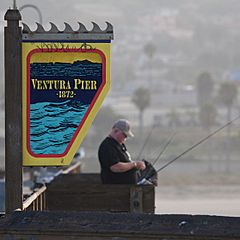 During its years of operation as a wharf, the pier underwent damage on multiple occasions due to storms, shipwrecks, and fire.

On June 25, 1889, the W. L. Hardison, a steamer operated by oil interests in Santa Paula, California, became engulfed in fire at the wharf after taking on a load of 2,000 barrels crude oil. The ship and cargo were a total loss, but the six crewmen on the ship were able to escape.

Fifteen years later, on December 19, 1914, the steamer Coos Bay was wrecked at the wharf. The ship was attempting to moor "when a strong rip tide swung her hard against the piling." The ship swung under the wharf, and "heavy swell . . . made the steamer a trip-hammer pounding against the structure from the under-side and lifting large sections of the wharf almost at every blow." The ship sunk in 12 feet (3.7 meters) of water, and for two days, the ship continued to "roll with the incoming waves . . . tearing the wharf to pieces when she strikes."

On February 13, 1926, the wharf was destroyed by heavy surf during a winter storm. George Proctor, an accountant for the Ventura Wharf & Warehouse Co., was killed when he walked to the end of the wharf as the structure collapsed below him. A middle selection collapsed first, leaving Proctor stranded. The outer portion then collapsed, dropping Proctor to the water below.

Again in December 1934, heavy waves cause a partial collapse of the pier.

The pier reached its greatest length of 1,958 feet (597 meters) when it was rebuilt after being damaged in a winter storm in 1937. At its maximum length, it was the longest wooden pier in California. The newly-constructed pier was not used as a commercial wharf and was used instead for fishing and recreation. The City of Ventura bought the pier in 1940 for $7,000.

Like the wharf that preceded it, the pier experienced repeated damage from storms and heavy surf. Notable instances include the following:

In October 1993, the pier re-opened following a $3.5 million rehabilitation, including a new deck and the installation of a "swell-actuated sculpture" titled "Wavespout" that sprayed seawater as waves rolled by. With a deck length of 1,958 feet (597 meters), it was California's longest wooden pier. A ribbon-cutting ceremony was presided over by Mayor Greg Carson. The far end of the pier had been closed since 1986.

After heavy surf knocked out more than 20 pilings in December 1994 and January 1995, the pier was again closed. Then, on December 13, 1995, high surf from a storm sheared off approximately 420 feet (130 meters) of the pier. With the loss of this section, the pier ceased being the longest wooden pier on the California coast. The "Wavespout" sculpture at the end of the pier was also lost in the storm.

Following the 1995 storm damage, the city opted not to rebuild the pier to it prior length. On April 1, 2000, the pier re-opened after a $2.2-million renovation that included steel-reinforced pilings and a new octagonal section at the pier's end. The current length is 1,600 feet (490 meters).

In 1976, the pier was designated as Ventura Historic Landmark No. 20.

All content from Kiddle encyclopedia articles (including the article images and facts) can be freely used under Attribution-ShareAlike license, unless stated otherwise. Cite this article:
Ventura Pier Facts for Kids. Kiddle Encyclopedia.