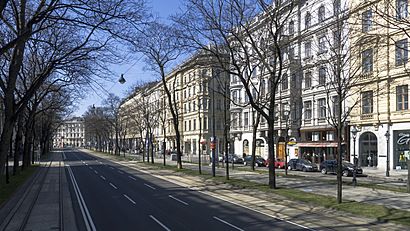 The Schubertring section of the Ringstrasse in Vienna

The Ringstrasse (German: Ringstraße, lit. ring road) is a circular grand boulevard that serves as a ring road around the historic Innere Stadt (Inner Town) district of Vienna, Austria. The road is located on sites where medieval city fortifications once stood, including high walls and the broad open field ramparts (glacis), criss-crossed by paths that lay before them.

It was constructed after the dismantling of the city walls in the mid-19th century. From the 1860s to 1890s, many large public buildings were erected along the Ringstrasse in an eclectic historicist style, sometimes called Ringstraßenstil ("Ring Road style"), using elements of Classical, Gothic, Renaissance, and Baroque architecture.

Because of its architectural beauty and history, the Vienna Ringstrasse has been called the "Lord of the Ring Roads" and is designated by UNESCO as part of Vienna's World Heritage Site.

The walls were replaced by the Ringstraße

On December 20th, 1857, emperor Franz Joseph I. ordered to destroy the old city walls and to build a street which should show the glory of the Habsburg Empire. The old walls were a traffic block because in 1850, the suburbs became part of the city as districts II. till IX. The order of the emperor outlined the exact size of the boulevard, as well as the geographical positions and functions of the new buildings. The only building which was erected by the city was the Town Hall.

During the following years, a large number of important public and private buildings were erected. Nobility and bourgeoisie began to build mansions along the street. Most of them were built in the Ringstraßenstyle, which mainly quotes older styles.

Sections of the Ringstraße

Buildings along the Ringstraße

All content from Kiddle encyclopedia articles (including the article images and facts) can be freely used under Attribution-ShareAlike license, unless stated otherwise. Cite this article:
Vienna Ring Road Facts for Kids. Kiddle Encyclopedia.