Kids Encyclopedia Facts
Not to be confused with Virginia Range.

The Virginia Mountains is an irregular mountain range entirely in Washoe County, Nevada, that generally extends north-northwest to south-southeast for 22 miles (35 km). 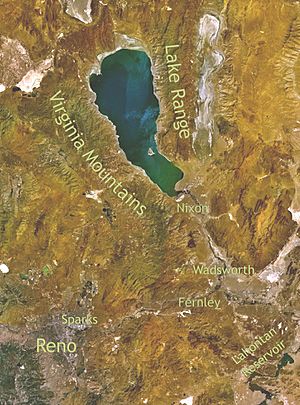 NASA Landsat view of the Virginia Mountains and surrounding area

The range is bordered by Astor Pass and Terraced Hills to the north, Pyramid Lake to the east, Mullen Pass and the Pah Rah Range to the south and Honey Lake Valley, Winnemucca Valley and Dogskin Mountain on the west. The eastern portion along Pyramid Lake is within the Pyramid Lake Indian Reservation.

“The Virginia Mountains of Washoe County, Nevada, is an uplifted and collapsed anticlinal structure having a N-S trend but bending toward the southeast at the southern end of the range. NW and NNW fault trends in Winnemucca Valley and within the low hills on the eastern range front are believed to be a part of the Walker Lane lineament. Topographic, structural, and geologic evidence yields confidently a first-order, right-lateral, strike-slip fault interpretation. Also indicated are second-order left-lateral, strike slip movements along the eastern mountain front. The structurally very complex southern one-fifth of the range together with the northern portion of the Pah Rah Range suggest distributive branching of the Walker Lane lineament in the brittle Hartford Hill rhyolite as the lineament nears termination in southern Washoe County. The present topography of the Virginia Mountains is the result of bending of layers of volcanic rocks, high- angle and strike-slip faulting, and erosion in an arid to semi-arid climate. Major and minor drainage is controlled almost exclusively by the structure. Fault valleys are characteristic of the entire range and are the principal topographic forms, but many other types of drainage are present. The higher elevations are representative of old erosion surfaces.”

All content from Kiddle encyclopedia articles (including the article images and facts) can be freely used under Attribution-ShareAlike license, unless stated otherwise. Cite this article:
Virginia Mountains Facts for Kids. Kiddle Encyclopedia.