Kids Encyclopedia Facts
Not to be confused with Virginia Mountains. 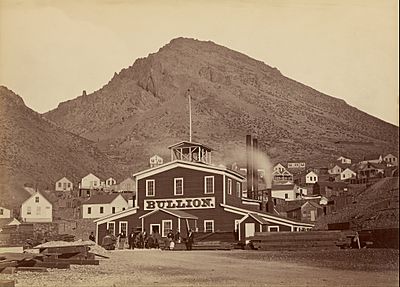 The Bullion Mine and mountain of the Virginia Range, Virginia City, Nevada.
Photograph by Carleton Watkins.

The Virginia Range is a mountain range of western Nevada, primarily within Storey County, and extending east into Lyon County. The range is named after James Finney, "Old Virginny", an early discoverer of gold associated with the Comstock Lode.

The mountain range forms a portion of the drainage divide between the Truckee River (north) and the Carson River (south). Truckee Meadows and the Washoe Valley are to the west, and the Lahontan Valley is to the east. It is associated with the Flowery Range.

Jeffrey pine (Pinus jeffreyi) is the dominant species at higher elevations. Other trees in the range include the Single-leaf Pinyon Pine (Pinus monophylla) and Utah Juniper (Juniperus osteosperma).

For the notable 1860s silver strike and mining town in the Virginia Range, see:

All content from Kiddle encyclopedia articles (including the article images and facts) can be freely used under Attribution-ShareAlike license, unless stated otherwise. Cite this article:
Virginia Range Facts for Kids. Kiddle Encyclopedia.