Vivaan Shah (born 11 January 1990) is an Indian film actor, who made his film debut with Saat Khoon Maaf (2011) as Arun Kumar. Thereafter, he signed a three-film deal with director Vishal Bhardwaj. In 2014, he was given a role in Farah Khan's film Happy New Year.

Shah is the younger son of actors Naseeruddin Shah and Ratna Pathak. He is the nephew of Lt. Gen. Zameer Uddin Shah, the former vice-chancellor of the prestigious Aligarh Muslim University. He is the brother of Imaad Shah and his paternal half sister is Heeba Shah.

Shah graduated from The Doon School in 2009. 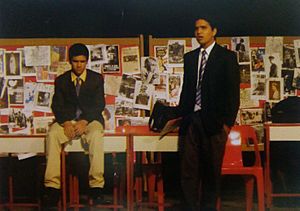 Shah playing Irwin in the 2007 production of Alan Bennett's The History Boys at The Doon School, Dehradun.

All content from Kiddle encyclopedia articles (including the article images and facts) can be freely used under Attribution-ShareAlike license, unless stated otherwise. Cite this article:
Vivaan Shah Facts for Kids. Kiddle Encyclopedia.